During the Civil War, the siege of Vicksburg (May 18 – July 4, 1863) in Mississippi was the final major military action in the Vicksburg Campaign. 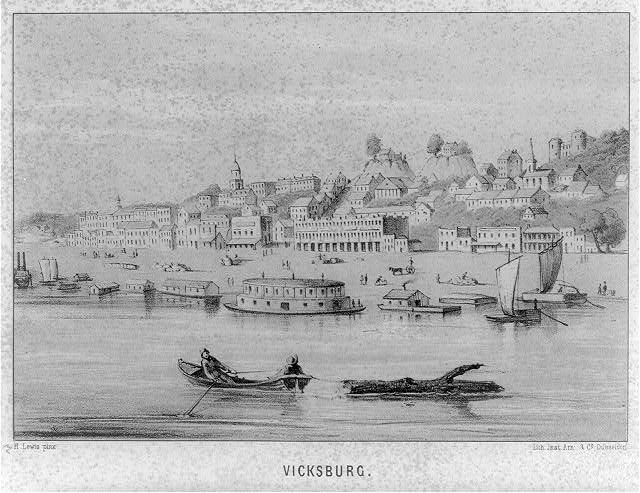 In a series of maneuvers, Union Maj. Gen. Ulysses S. Grant and his Army of the Tennessee crossed the Mississippi River and drove the Confederate Army of Vicksburg led by Lt. Gen. John C. Pemberton into the defensive lines surrounding the fortress city of Vicksburg, Mississippi. 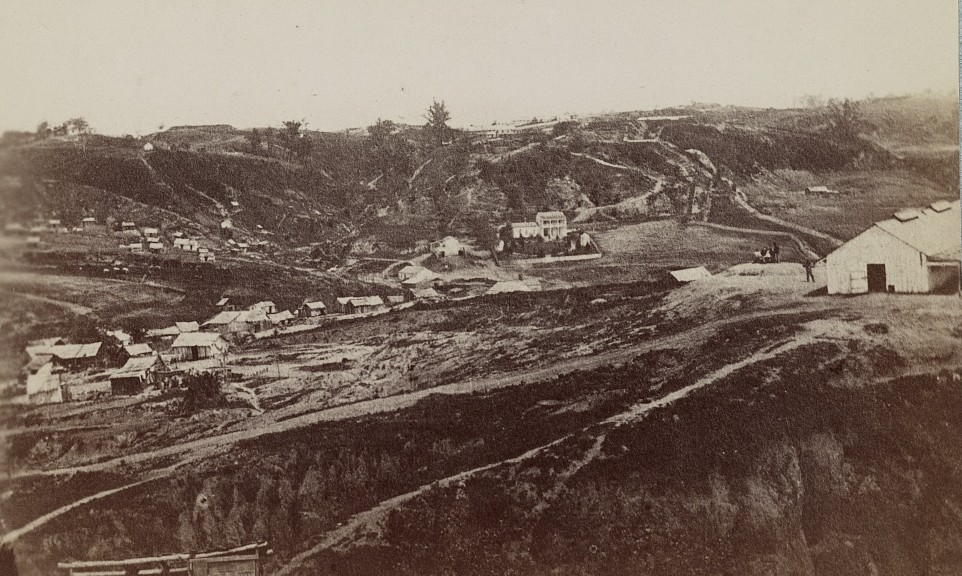 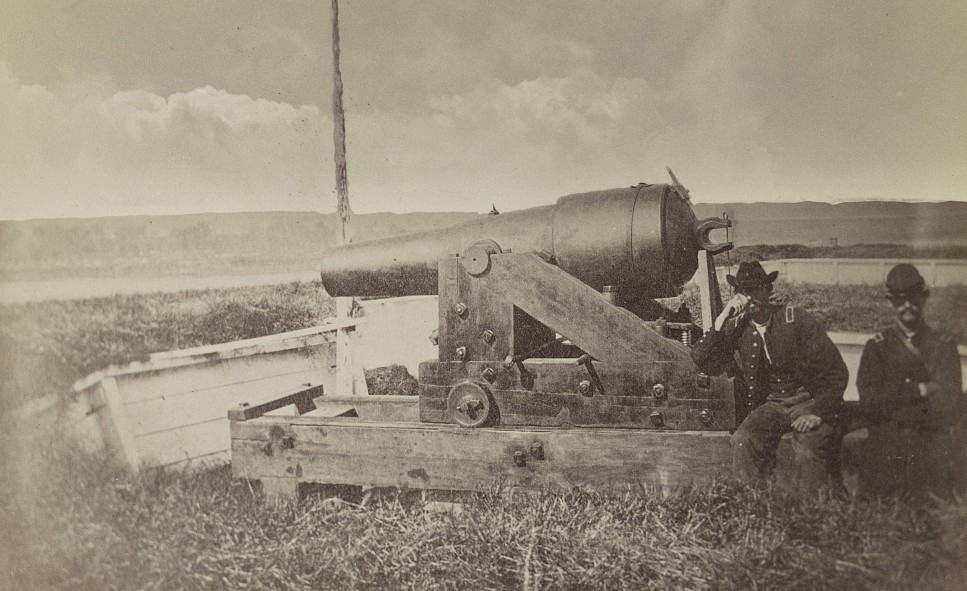 But the Seige of Vicksburg was not only a battle between the north and south, it was also a struggle for survival for the citizens of Vicksburg. From their diaries, we learn the difficulties they faced. Many resorted to leaving their homes and living in caves during the seige to escape the constant bombardment. Those that remained in their homes were in a constant state of fear. 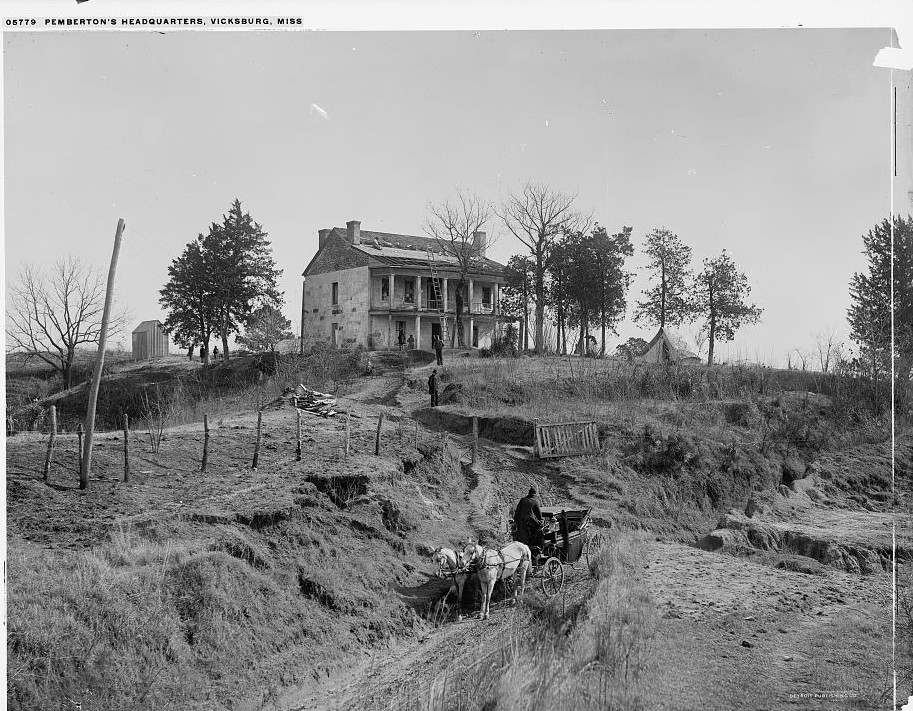 Emma Balfour and her physician husband, William, lived next door to General John Pemberton’s headquarters in Vicksburg. The Balfours rejected cave life and remained in their house during the siege. Emma kept a diary, part of which survived and is stored in the Mississippi Department of Archives and History. The following is an excerpt from the May 30 entry:

“At 12 o’clock the guns all along the lines opened and the parrot shells flew as thick as hail around us! Then there was commotion! We had gone upstairs determined to rest lying down but not sleeping, but when these commenced to come it was not safe upstairs so we came down in the sitting room and lay down upon the bed there, but soon found that would not do as they come from the south-east as well as east and might strike the house.

Still from sheer uneasiness we remained there til a shell struck in the garden against a tree, and at the same time we heard the servants all up and making exclamations. We got thoroughly worn out and disheartened and after looking to see the damage, went into the parlor and lay on the sofas there until morning, feeling that at any moment a mortar shell might crash through the roof, though we felt comparatively safe from the others.

We have slept scarcely none now for two days and two nights. Oh! it is dreadful. After I went to lie down while the Dr. watched every shell from the machines as they came rushing down like some infernal demon, seemed to me to be coming exactly on me, and I had looked at them so long that I can see them just as plainly with my eyes shut as with them open. They come gradually making their way higher and higher, tracked by their firing fuse till they reach their greatest altitude—then with a rush and whiz they come down furiously, their own weight added to the impetus given by the powder. Then lookout, for if they explode before reaching the ground which they generally do, the pieces fly in all directions—the very least of which will kill one and most of them of sufficient weight to team through a house from top to bottom! The parrot shells come directly so one can feel somewhat protected from them by getting under a wall, but when both come at once and so fast that one has not time to see where one shell is going before another comes—it wears one out.”

Many citizens moved their entire household to caves and lived there during the seige. As you can imagine, life was difficult for them as well.

In 1864 D. Appleton and Company of New York published a Volume entitled My Cave Life in Vicksburg, with Letters of Trial and Travel, By a Lady. The lady was Mary Ann Loughborough, and the account she wrote is the most thorough and vivid picture we have of cave life in the besieged city. The following accounts are taken from her book.

“It was about four o’clock, one Wednesday evening—the shelling during the day had gone on about as usual—I was reading in safety, I imagined, when the unmistakable whirring of Parrott shells told us that the battery we so much feared had opened from the intrenchments. I ran to the entrance to call the servants in; and immediately after they entered, a shell struck the earth a few feet from the entrance, burying itself without exploding. I ran to the little dressing room, and could hear them striking around us on all sides. I crouched closely against the wall, for I did not know at what moment one might strike within the cave.

A man came in much frightened, and asked to remain until the danger was over. The servants stood in the little niche by the bed, and the man took refuge in the small ell where I was stationed. He had been there but a short time, standing in front of me, and near the wall, when a Parrott shell came whirling in at the entrance, and fell in the centre of the cave before us all, lying there smoking. Our eyes were fastened upon it, while we expected every moment the terrific explosion would ensue. I pressed my child closer to my heart, and drew nearer to the wall. Our fate seemed almost certain. The poor man who had sought refuge within was most exposed of all. With a sudden impulse, I seized a large double blanket that lay near, and gave it to him for the purpose of shielding him from the fragments; and thus we remained for a moment, with our eyes fixed in terror on the missile of death, when George, the servant boy, rushed forward, seized the shell, and threw it into the street, running swiftly in the opposite direction.

Fortunately, the fuse had become nearly extinguished, and the shell fell harmless—remaining near the mouth of the cave, as a trophy of the fearlessness of the servant and our remarkable escape. Very thankful was I for our preservation, which was the theme of conversation for a day among our cave neighbors. The incident of the blanket was also related; and all laughed heartily at my wise supposition that the blanket could be any protection from the heavy fragments of shells.”

“Sitting in the cave, one evening, I heard the most heartrending screams and moans. I was told that a mother had taken a child into a cave about a hundred yards from us; and having laid it on its little bed, as the poor woman believed, in safety, she took her seat near the entrance of the cave. A mortar shell came rushing through the air, and fell with much force, entering the earth above the sleeping child—cutting through into the cave—oh! most horrible sight to the mother—crushing in the upper part of the little sleeping head, and taking away the young innocent life without a look or word of passing love to be treasured in the mother’s heart.”

“Our dining, breakfasting, and supper hours were quite irregular. When the shells were falling fast, the servants came in for safety, and our meals waited for completion some little time; again they would fall slowly, with the lapse of many minutes between, and out would start the cooks to their work.”

Photograph shows the trenches excavated by Major General John A. Logan’s troops during the seige of Vicksburg. In the distance is Shirley House 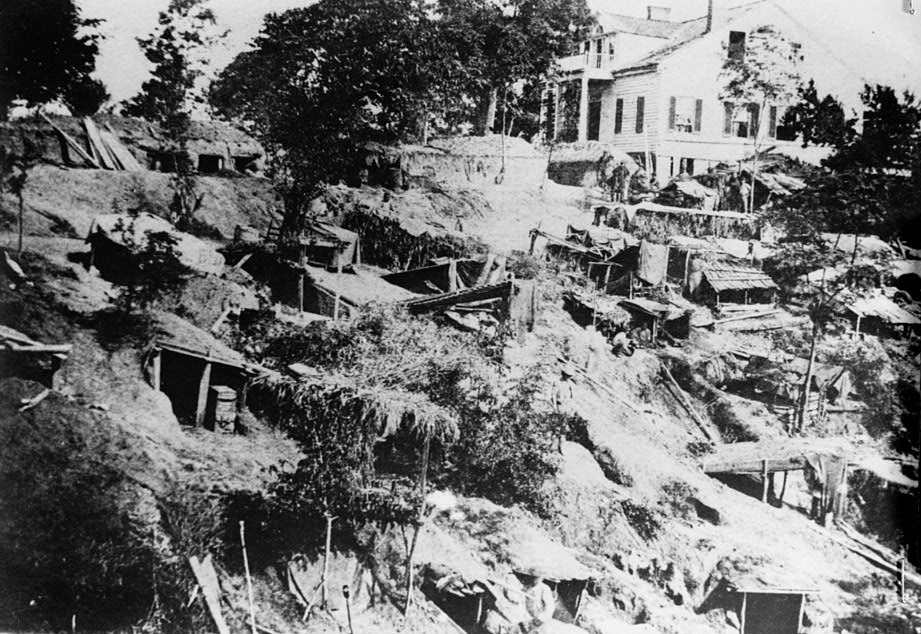 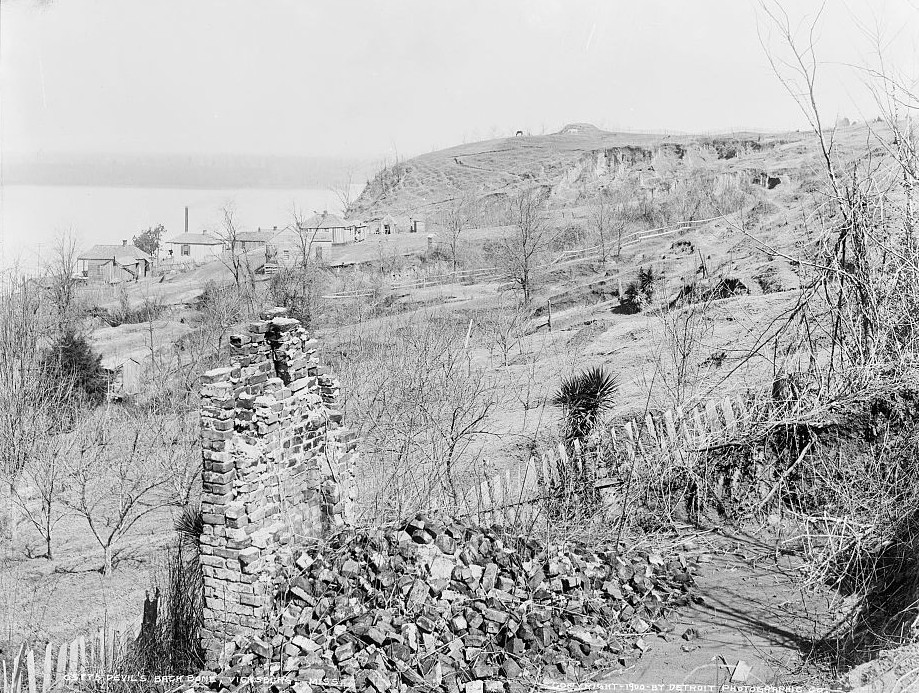 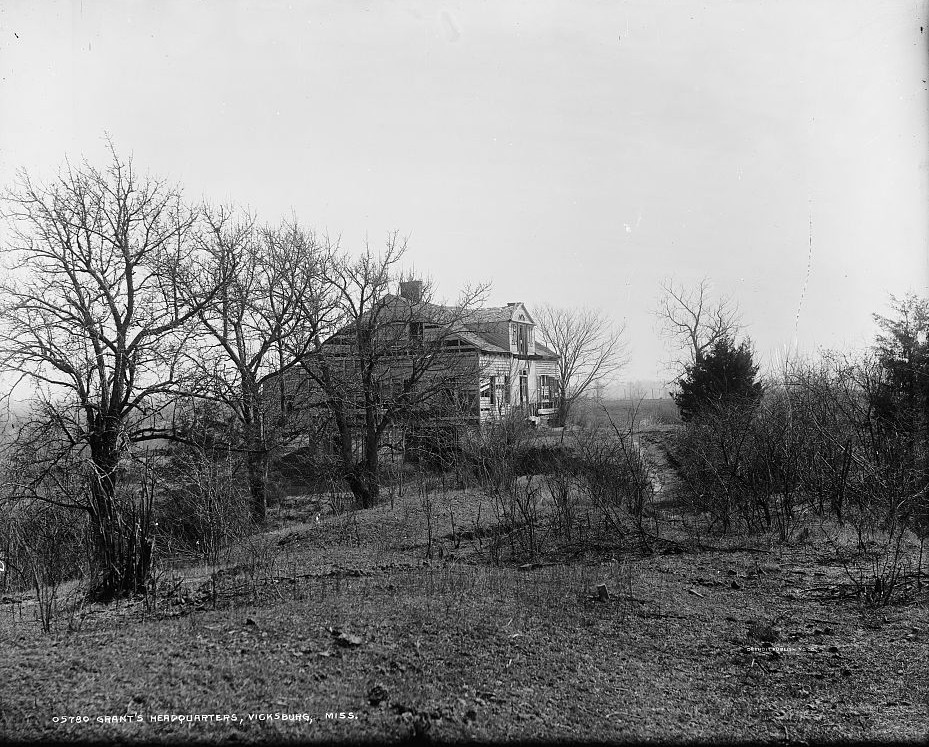 A final note on Vicksburg

Citizens throughout the south faced shortages of every kind and this was no exception in Vicksburg where the editor of The Citizen newspaper was forced to print the paper on wallpaper.

“Due to a shortage of paper in Louisiana and Mississippi some 31 known editions of newspapers were printed on the back side of wallpaper. Six siege editions of the Vicksburg Daily Citizen have been identified: June 16, 18, 20, 27, 30, and July 2, 1863.

On July 4, victorious Union soldiers reprinted the July 2 edition with an addendum. They had found that editor J. W. Swords had written about Grant’s boast that he would have dinner in Vicksburg on July 4, “Ulysses must get into the city before he dines in it. The way to cook a rabbit is first to catch it’.”

The soldiers inserted the following paragraph:

“Two days bring about great changes. The banner of the Union floats over Vicksburg. Gen. Grant has caught the rabbit,’ he has dined in Vicksburg, and he did bring his dinner with him. The Citizen lives to see it. For the last time it appears on Wallpaper.’ No more will it eulogize the luxury of mule-meat and fricasseed kitten—urge Southern warriors to such diet nevermore. This is the last wallpaper edition, and is, excepting this note, from the types as we found them.”

The Library of Congress has a copy of this July 2 edition as can been seen in the video below.