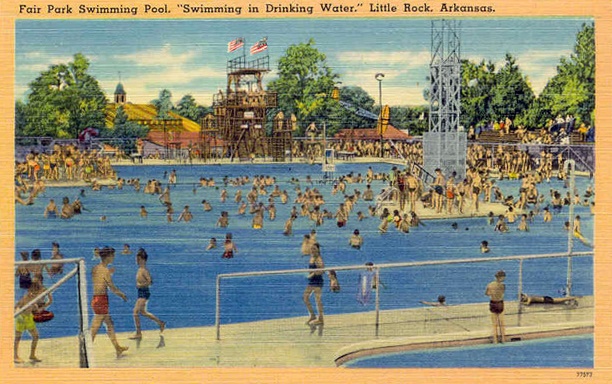 My husband was quite an athlete; who enjoyed all sports. He grew up in the hills of Arkansas and was an avid swimmer/diver. In early marriage, he and I went to a neighborhood pool near my parents’ house. My husband really put the diving board to use. Some young boys were lined up around the pool observing his antics. After Mack finished with his diving, one of the boys said: “Gee, Mister, I’ll bet you could really dive when you were young!” Mack was at least 29.

Fortunately, our three sons took after their Dad instead of me. They learned to swim at our neighborhood pool. The youngest could dive before he learned to swim. As he hit the water, he would coast to the side of the pool. I would stand near the diving well with a towel over my arm. Since he had not passed his swimming test, his instructions were to grab hold of the towel if he had a problem.

During that time, we made a trip to visit family in California. After driving through Yosemite National Park, we stopped at a swimming hole. All three sons could now swim. My husband, once again, went through the diving routine. Again, young boys were lined up around the rock cliff where the diving expedition was occurring. The only thing that slowed things down, was when a female topless swimmer went into the water. She cleared the swimming hole! Oblivious of his surroundings, our youngest son, John, was happily swimming around in the water.

Our second son is now the approximate age his Dad was during the California swimming hole incident. Joe was recently relating a diving experience to me. He was at a pool that had an excellent diving board. Being his Father’s son, he was going through the diving antics. Young boys and the lifeguard were sidelined observing Joe’s breathtaking dives. They didn’t actually say it; but I thought: “Gee mister, I’ll bet you could sure dive when you were young!”