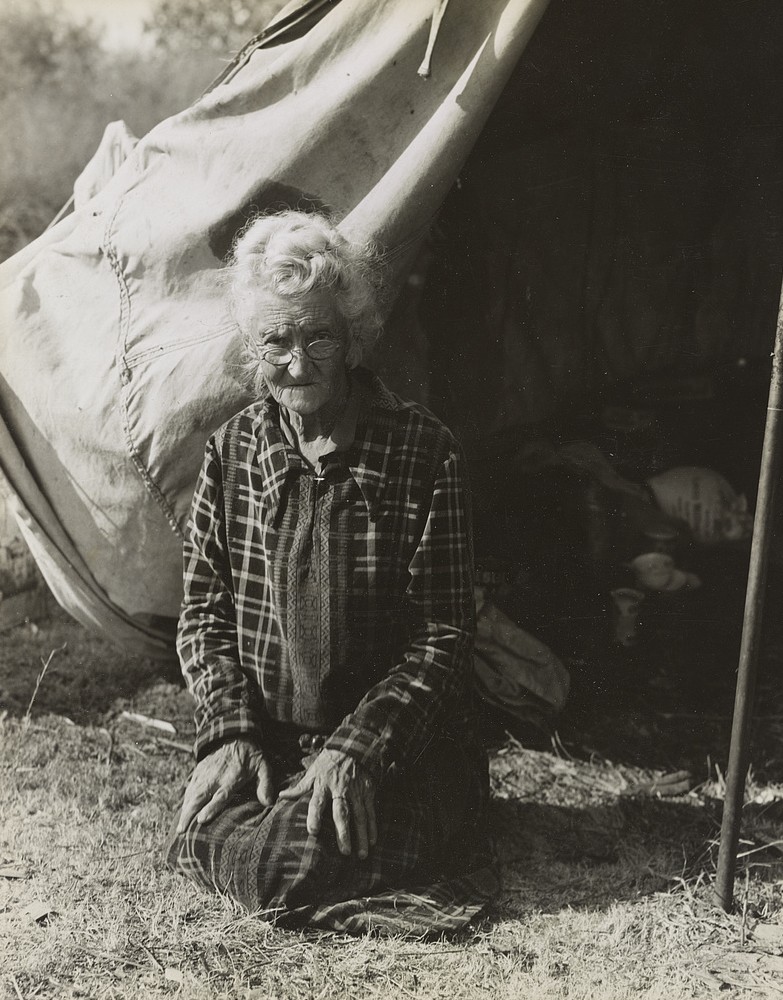 The Wall Street Crash of 1929 was one of the main causes of the Great Depression that affected people across the country in many ways. Many people lost their homes and went on the road in search of work. Oklahoma and the mid-west was doubly affected due to the Dust Bowl that destroyed their farms.  Photographer Dorothy Lange captured the emotions of many of these people in her breath-taking photos of families arriving in California from Oklahoma.

The song, I’m going down this road feeling bad was created in 1938 by Ford, Warde (performer); Cowell, Sidney Robertson (collector);Ford, Warde (performer) as anArchive of Folk Culture (Library of Congress).  It was the song of the migrant families who were tractored out of Texas, dusted out of Oklahoma and flooded out of Arkansas.”

This first photograph, taken in November 1936, is of an eighty-year old grandmother of 22 children. She was from a farm in Oklahoma and was found living in a camp in the Bakersfield, California area. When questioned about her situation, she answered, “If you lose your pluck you lose the most there is in your – all you’ve got to live with.” 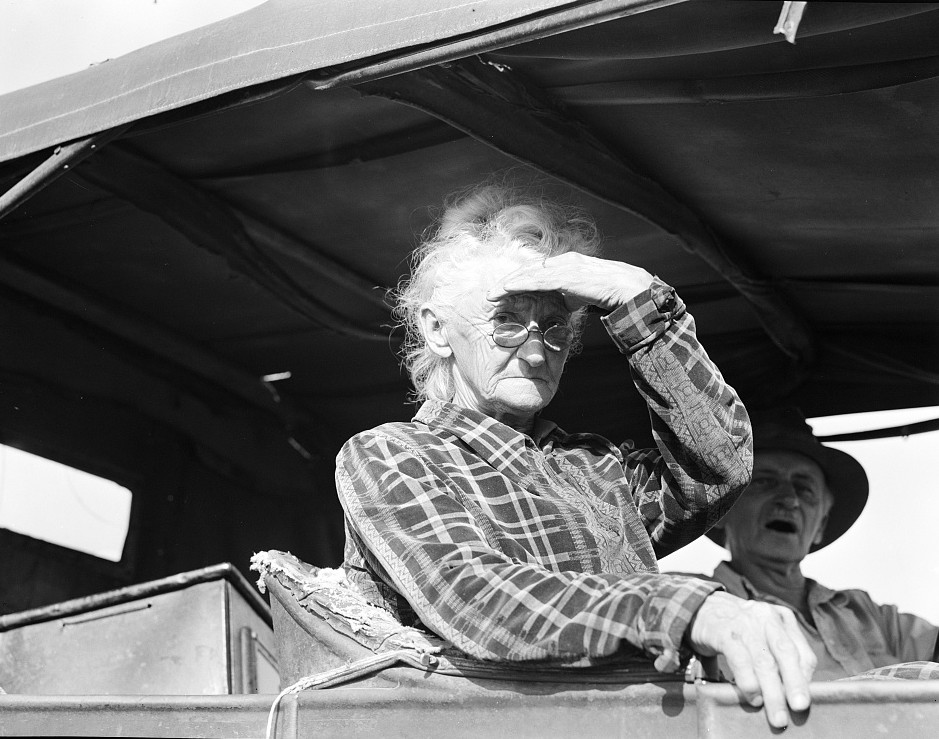 The photograph below is of a newly arrived refugee family from Tulsa, Oklahoma in August of 1936 by Dorothea Lange of a mother and three half-grown children. There was no father.  The mother still had high hopes for her family when she said, “Anybody as wants to work can get by. But if a person loses their faith in the soil like so many of them back there in Oklahoma, then there ain’t no hope for them. We’re making it all right here, all but for the schooling, ’cause that boy of mine, he wants to go to the University” 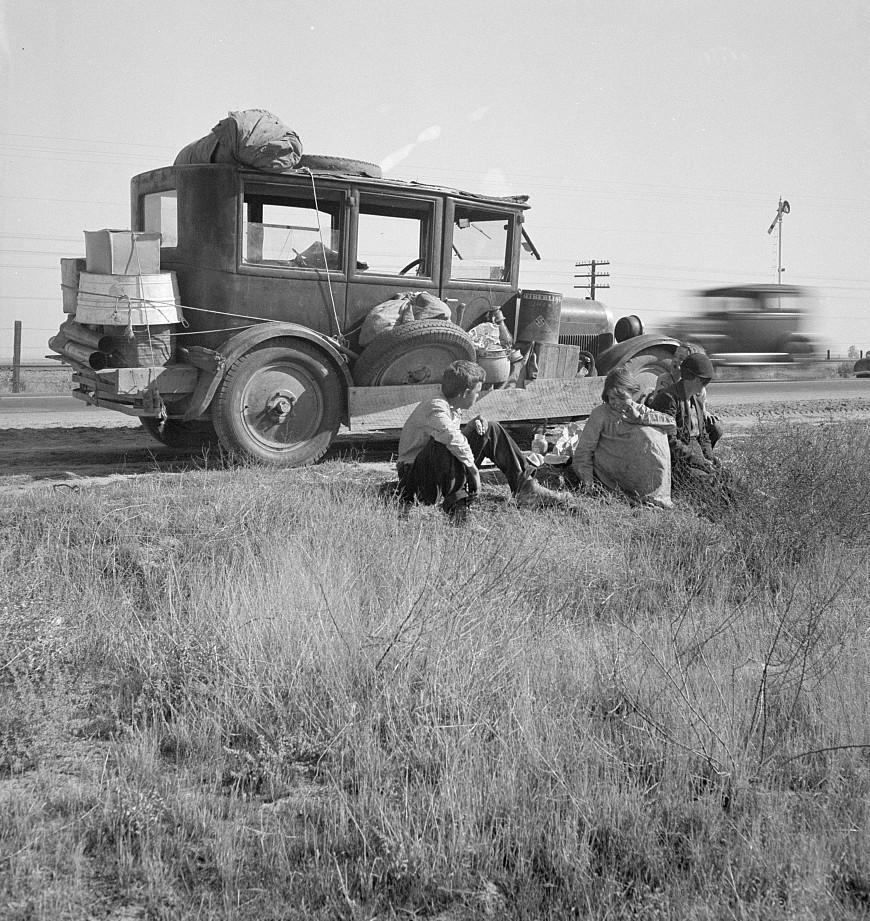 When families reached California, they set up camps near the road. The photograph below was taken by Dorothea Lange in February 1937 of a roadside camp of forty families who left their homes because of drought and depression. The refugees camped by the roadside beside an irrigated pea field. A freeze which destroyed the pea crop threw practically every family in this camp on emergency relief. They were nine miles from Calipatria, California. 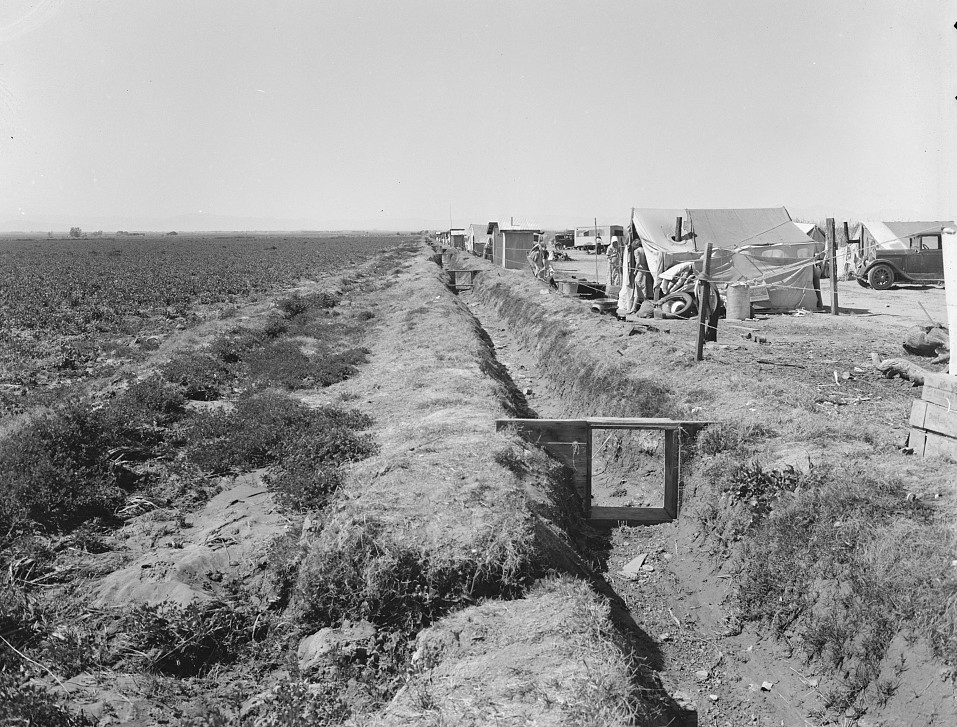 The photographs below are of  an impoverished family of nine on a New Mexico highway, depression refugees from Iowa. They left Iowa in 1932 because of father’s ill health. The father was an auto mechanic laborer and painter by trade. He became ill with tuberculosis. There were nine children including a sick four-month-old baby with no money at all. They were about to sell their belongings and trailer for money to buy food. The family had been on relief in Arizona, but refused entry on relief roles in Iowa to which state they wished to return. When asked why, they replied, “We don’t want to go where we’ll be a nuisance to anybody.” 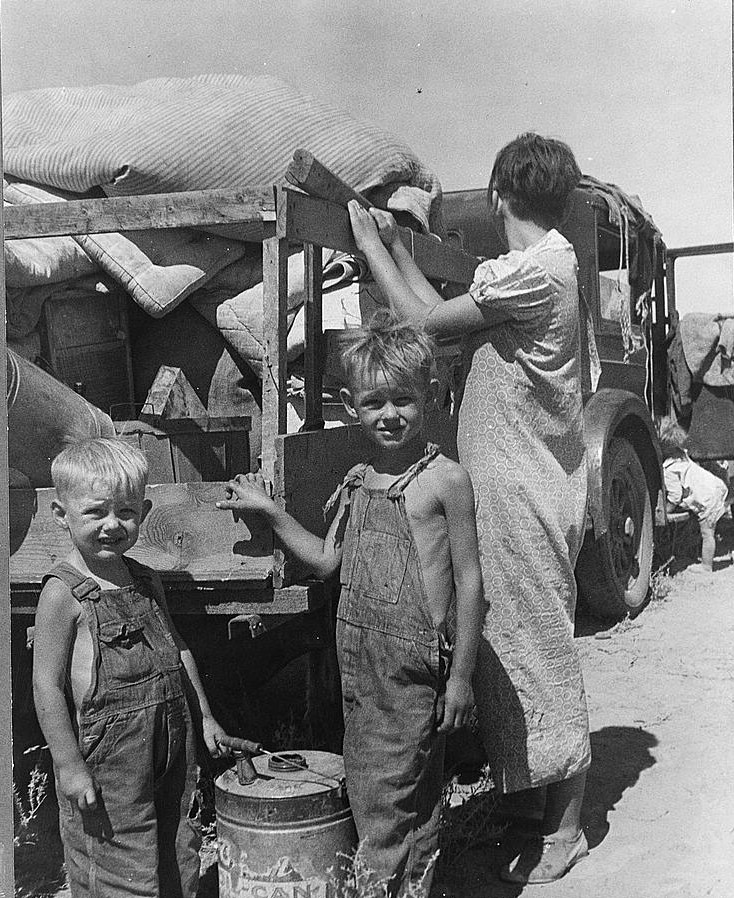 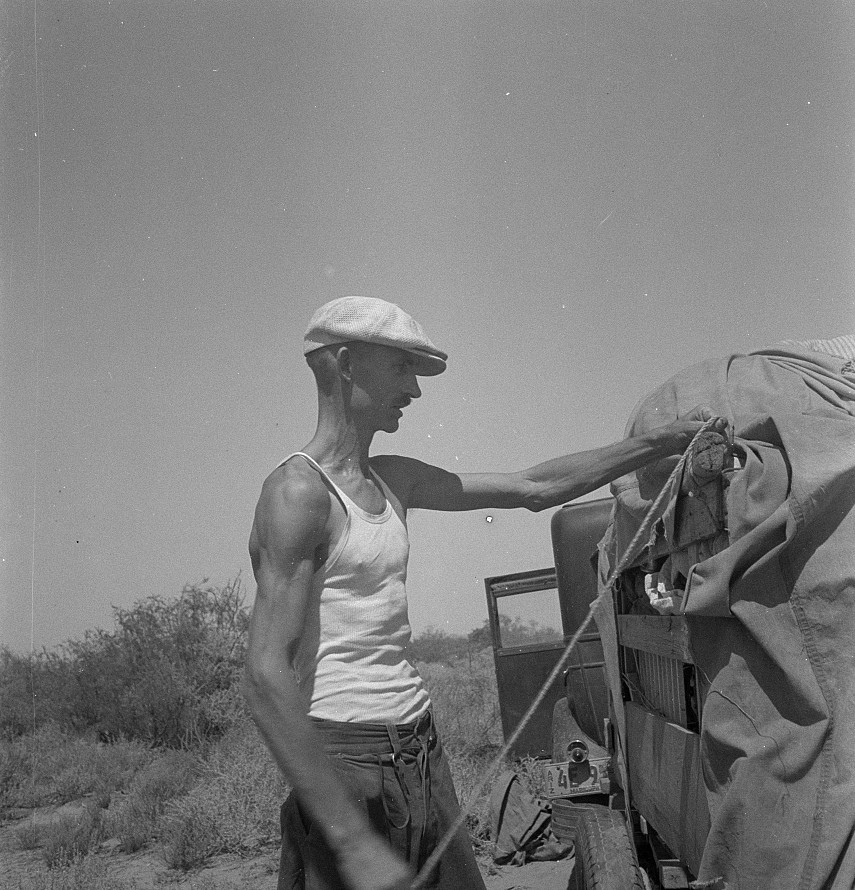 Tuberculosis was a common illness in the 1930’s. Many people with the disease had no recourse but to continue to work as evidenced by these two photographs of a migrant worker in Kern County, California and the mother with tuberculosis from Oklahoma, who was living in the Kern migrant camp in California. The mother received daily visits from the county nurse while her husband worked in the cotton field. He could pick one hundred pounds a day. 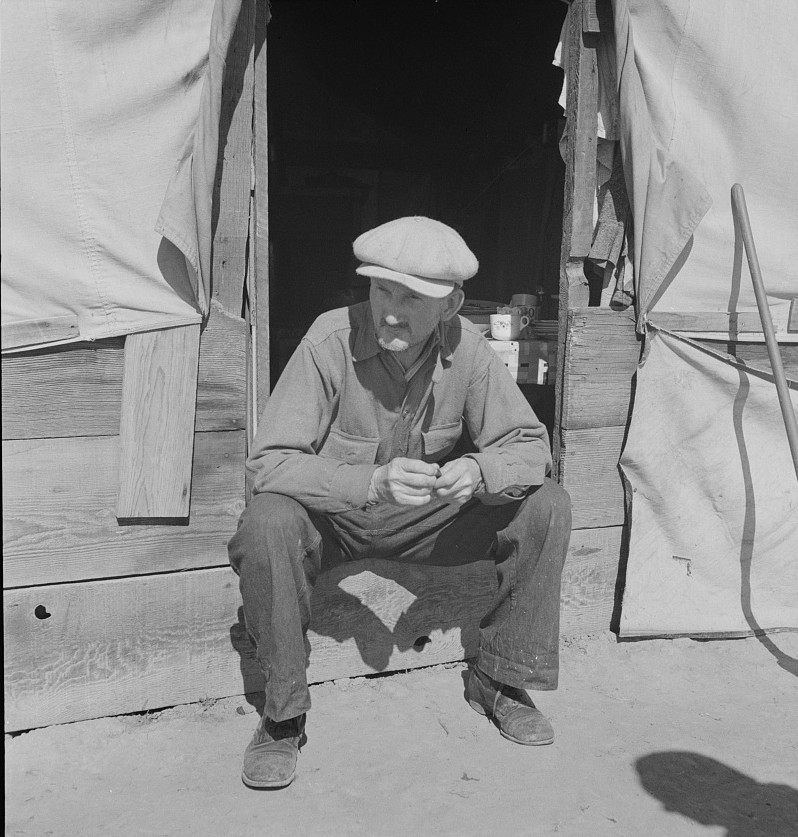 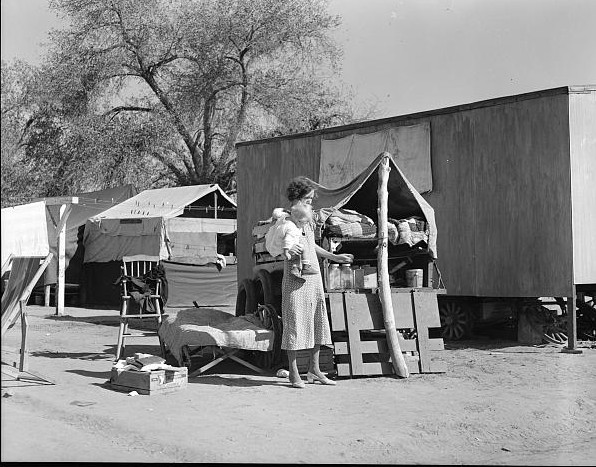 The photograph below is of a Nebraska farmer who came to pick peas  near Calipatria, California in 1939. 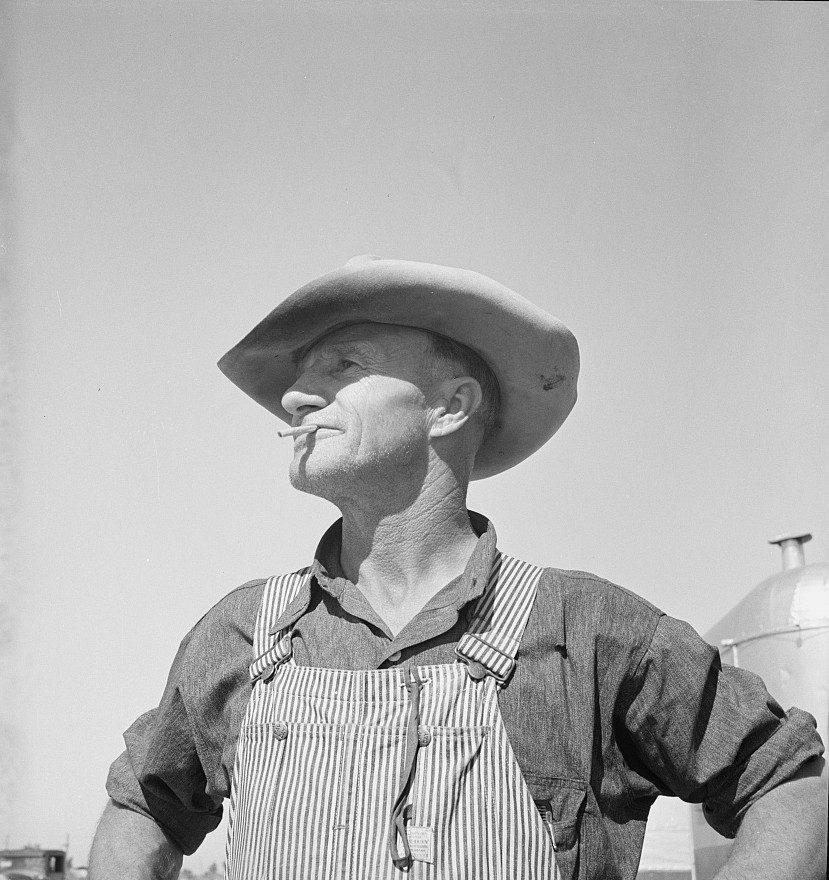 The photograph below is at a roadside camp near Bakersfield, California of all the worldly posessions of a refugee from Texas dust, drought and depression taken in November 1935. 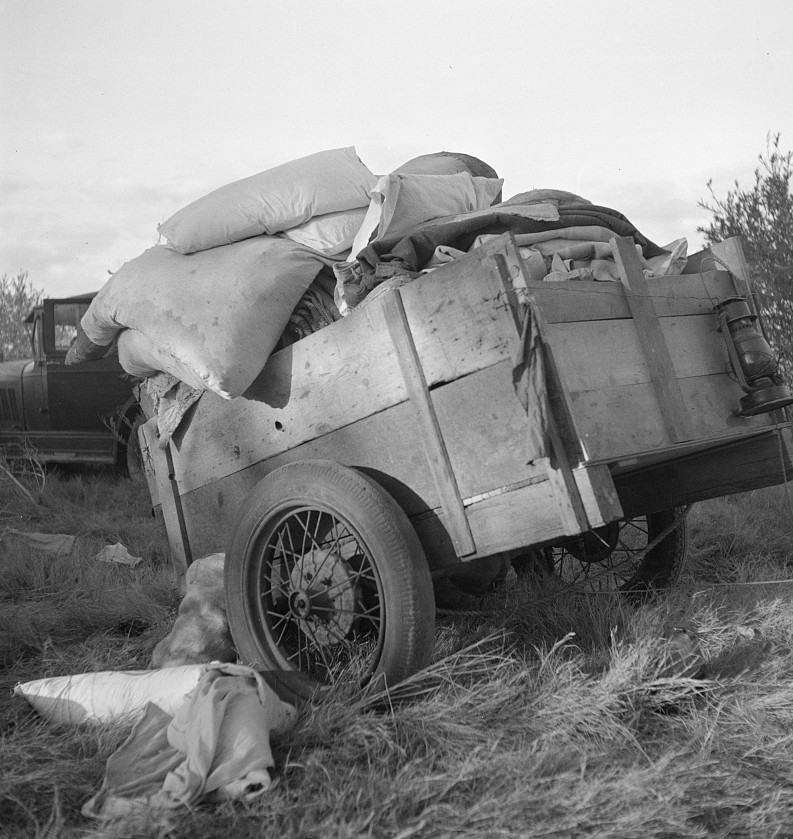 This man was once a prosperous Texas farmer and was living near Bakersfield, California in 1935. He was looking for work and work for his family in cotton. He found no work and no money. 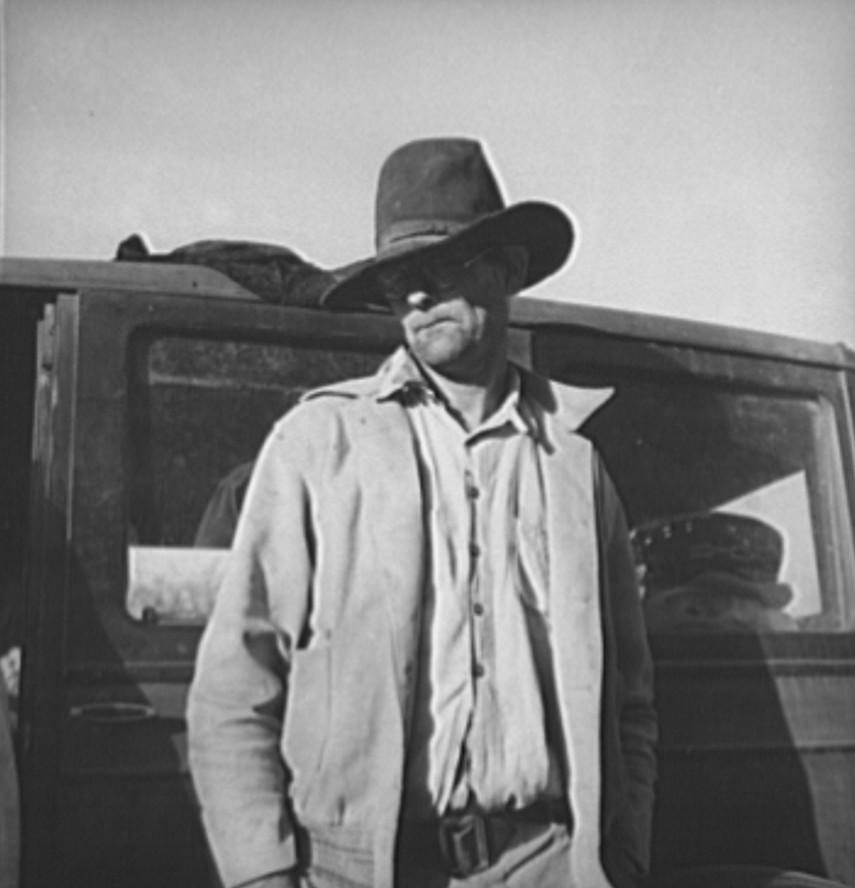 This was a camp of single men by the roadside. They have come in to work in the pea fields. Nipomo, California in 1935. 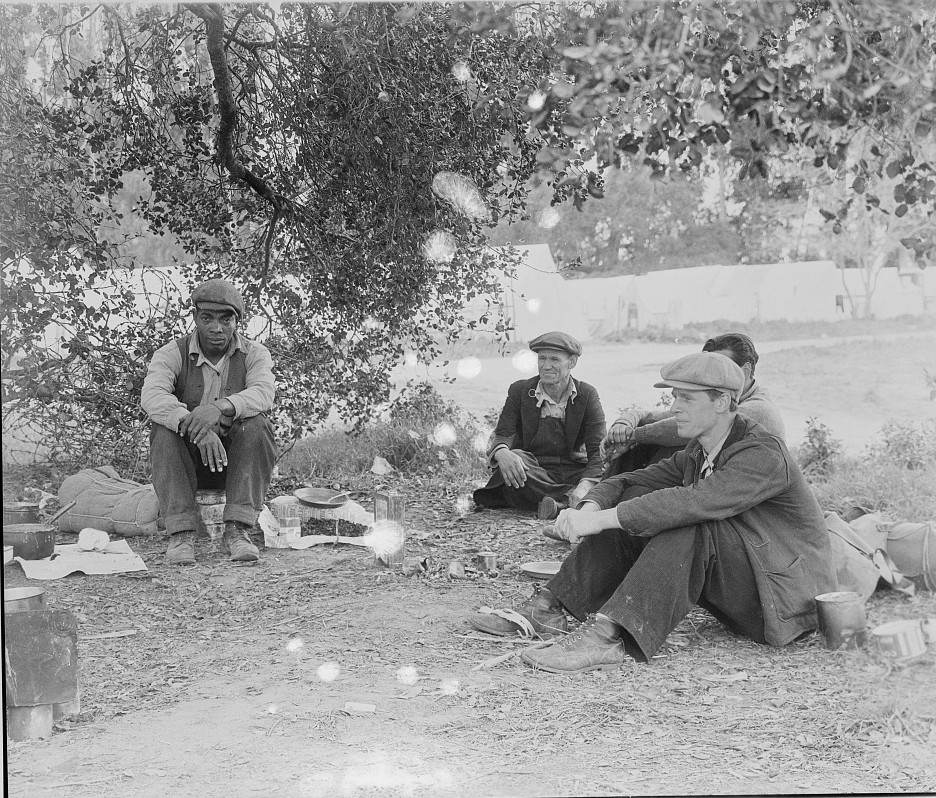 This was the son of depression refugee from Oklahoma, who lived  in California in November 1935 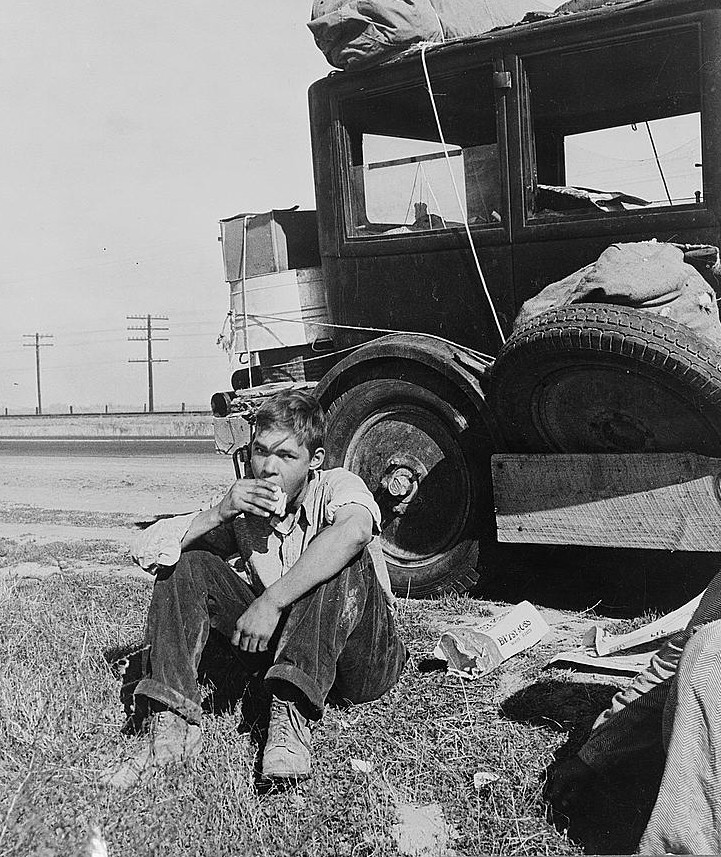 This was the only home of a depression-routed family of nine from Iowa in August 1936. 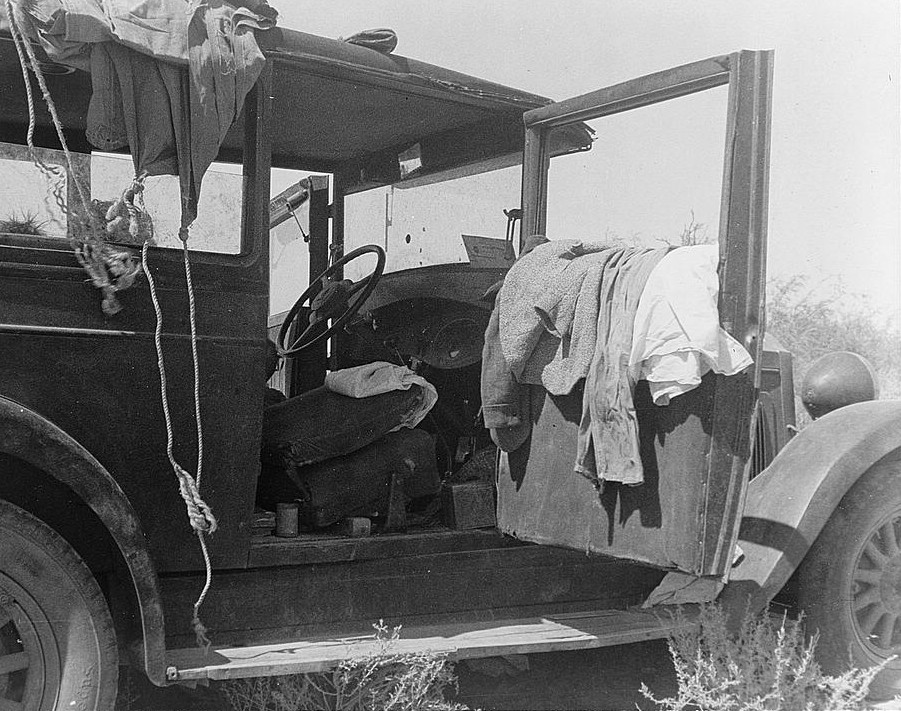 Drought and depression forced this refugee’s family (below) from Oklahoma to work in the pea fields of Imperial Valley of California in March of 1937. 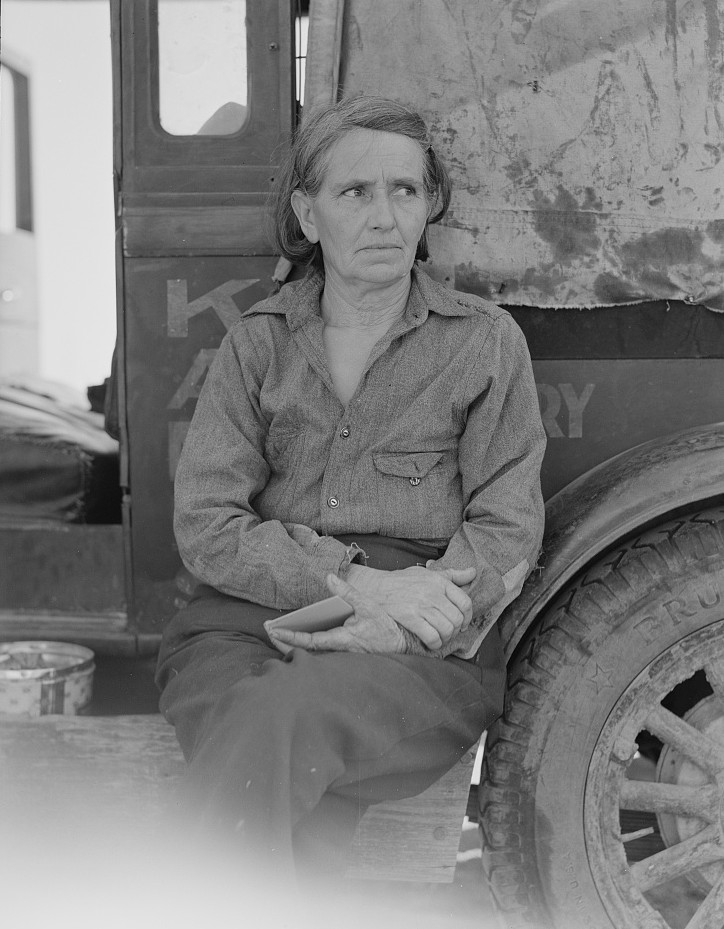