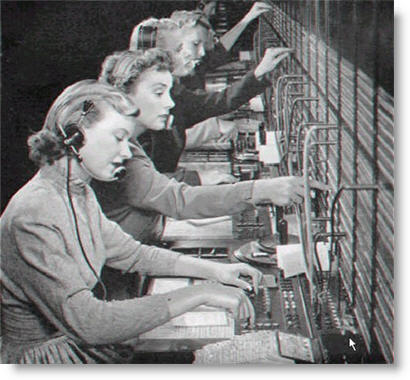 In 1974, as an April Fool joke, a radio announcer told his audience that, since the community had experienced several nights of unusual below-zero temperature, the telephone company, at a specified time, would put “heat-a-lators” on all the lines to thaw them out. The disc jockey told his listeners to put their phone receivers in an empty bucket so that, as the lines thawed out, water wouldn’t run out and ruin their rugs.

So many people took their phones off the hook that the central office was in a “no tone” condition for four minutes.”

This prank reminds me of the prank my “Uncle Buddy” Rev. W. O. Cottingham (a constant prankster when he was young) pulled on his mother around the late 1950’s He called her one day, disguised his voice and told her that he was with the telephone company. He stated that he was calling to inform her that the telephone company would be blowing out the dust in the telephone lines that day and she needed to put her headset in a paper bag to avoid the dust being blown in the house. My gullible grandmother promptly obeyed. Later that evening, my mother visited and asked why the phone was in a paper bag and of course the prankster was discovered. The whole family enjoyed teasing my grandmother about that prank for years.

A similar prank is sometimes still used with the internet that goes something like “It is necessary to inform all internet dependent facilities that the internet will be shut down for cleaning for twenty-four hours from midnight on March 31 through the early hours of April 2. This cleaning is necessary to clear out the “electronic flotsam and jetsam” that has accumulated in the network. Dead email and inactive ftp, www, and gopher sites will be purged. During this period users are warned to disconnect all devices from the internet to avoid loosing data.”