This may be the earliest film of a baseball game made in May 20, 1898 by Thomas A. Edison, Inc. from the Library of Congress.

Notes about the film state:

Baseball cards were not commonplace until the 1880s

Baseball cards as we know them did not become commonplace until the 1880s.  This early  prototype (below)  is actually an original photograph mounted on a card. At the start of the 1865 season, the Atlantics presented opposing teams with framed photographs of the “Champion Nine.”

The Scottish-born photographer Charles H. Williamson opened a daguerreotype studio in Brooklyn in 1851, continuing to work as a photographer until his death in 1874. 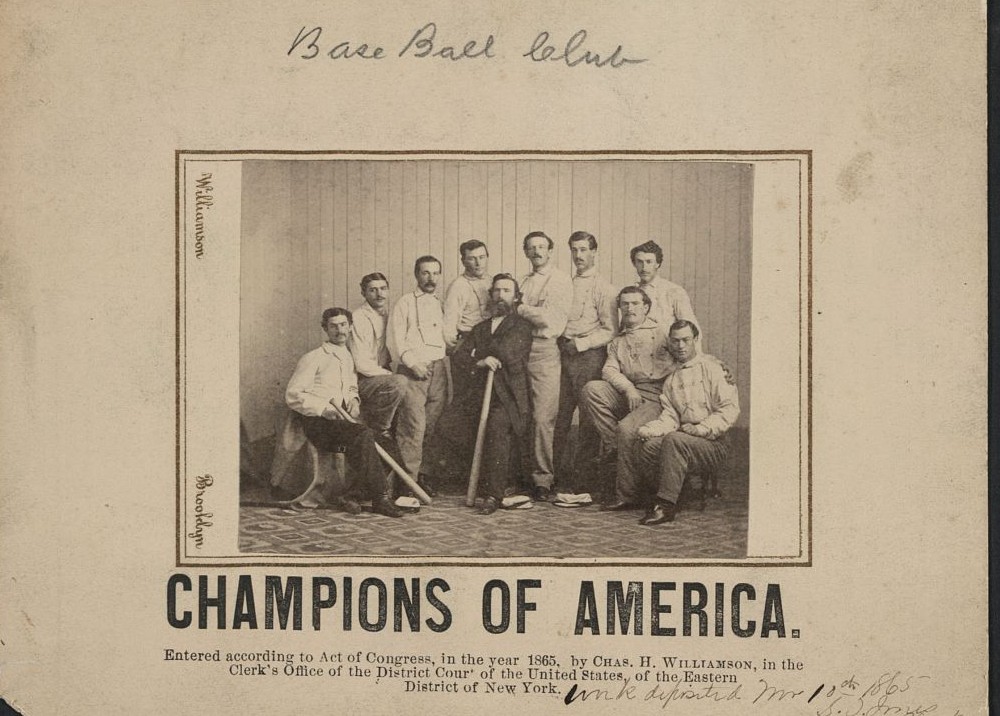 “Baseball, America’s national pastime, evolved from a child’s game to an organized sport in the 1840s and 1850s. It was an urban sport, and the first teams were established in New York City and Brooklyn. By 1860 baseball had replaced cricket as the nation’s most popular ball game. Before the Civil War, more than one hundred baseball teams played in the New York City area. During the war, the number of teams dwindled to fewer  than thirty, but thousands of spectators flocked to games. The Brooklyn Atlantics dominated  early baseball by winning championships in 1861, 1864, and 1865. The Atlantics usually crushed their competition, scoring two or three times more runs than their opponents. The game was an amateur sport: according to the rules of the National Association of Base Ball Players, athletes could not accept wages to play ball, although gifts and jobs were sometimes offered as a means of compensation.” (From American Treasures exhibition – Library of Congress)

Photo below shows the U.S.S. Maine baseball team including pitcher William Lambert (back row, far right) and John H. Bloomer (back row, far left). All of the team members except for John Bloomer were killed in the explosion of the U. S. S. Maine on February 15, 1898. 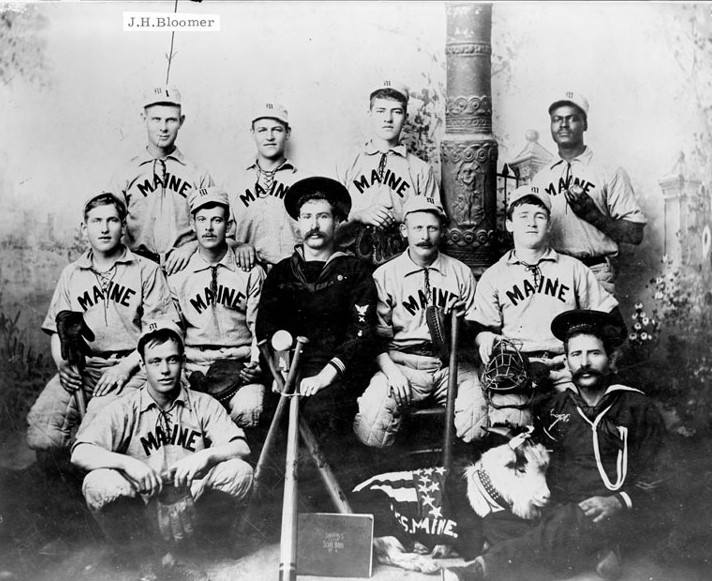 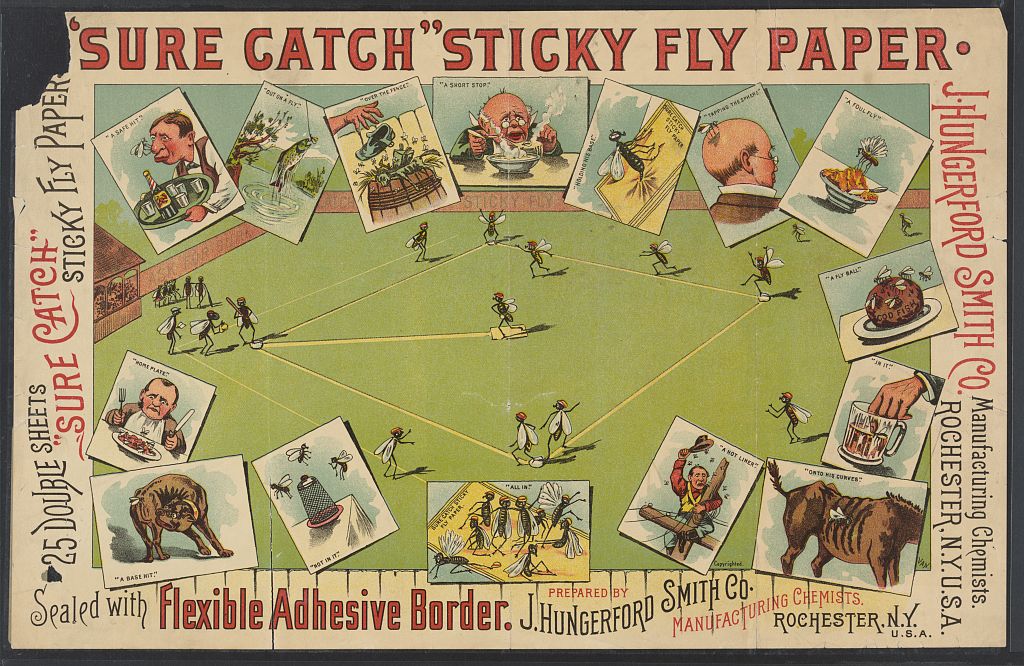 This is an Illustration showing a small crowd gathered around the edges of a field watching a baseball game at Elysian field Hoboken, New Jersey Oct 15, 1859

The pro-Lincoln satire below was deposited for copyright weeks before the 1860 presidential election. The contest is portrayed as a baseball game in which Lincoln has defeated (left to right) John Bell, Stephen A. Douglas, and John C. Breckinridge. Lincoln (right) stands with his foot on “Home Base,” advising the others,  Currier & Ives ca. 1860 by artist Louis Maurer. 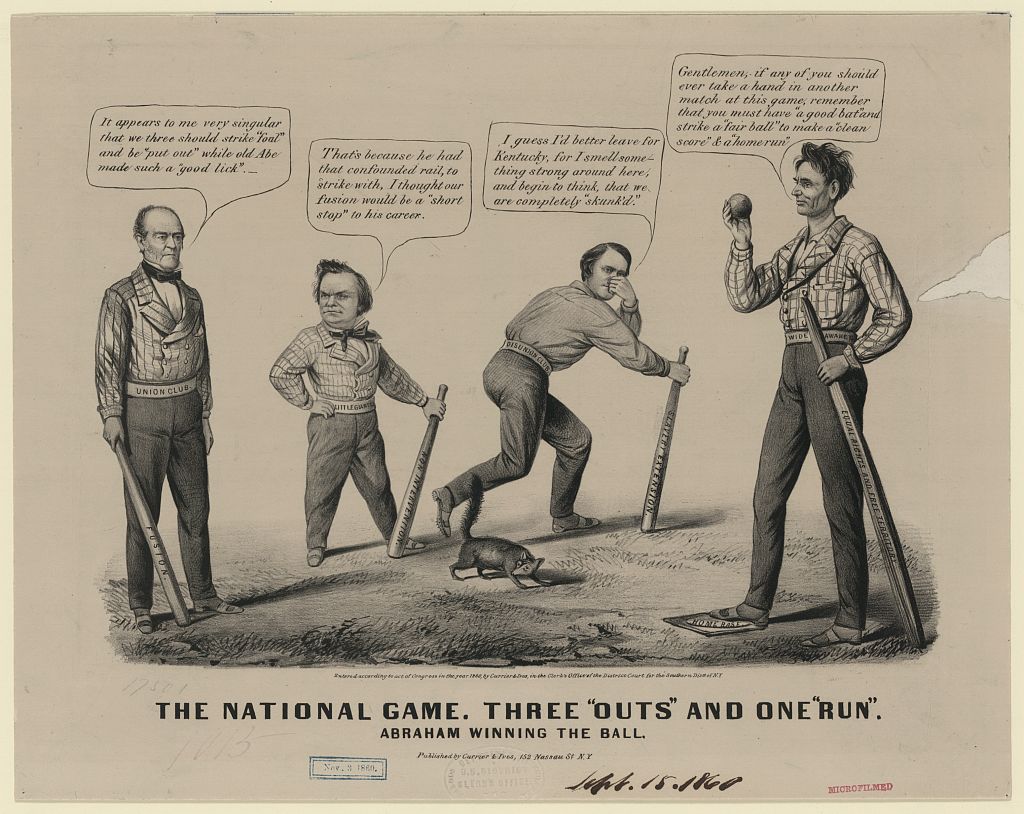 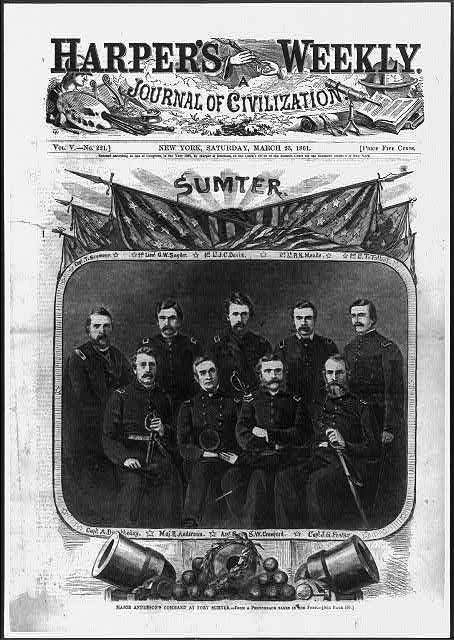 This is a sheet music cover for piano showing baseball players on the field and spectators under the tent of the “M.B.B.C.” (Mercantile Base Ball Club) in background. Home run quick step – respectfully dedicated to the members of the Mercantile Baseball Club of Philadelphia by John Zebley, Jr. – T. Sinclair, lithographer ca. 1861 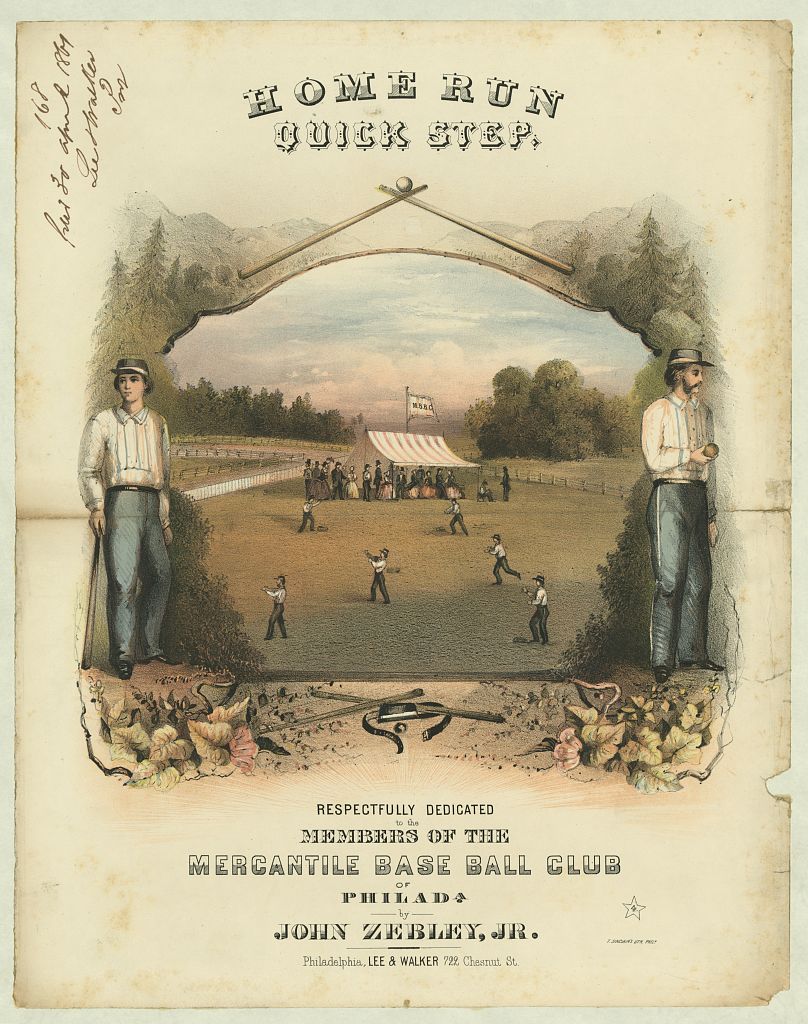 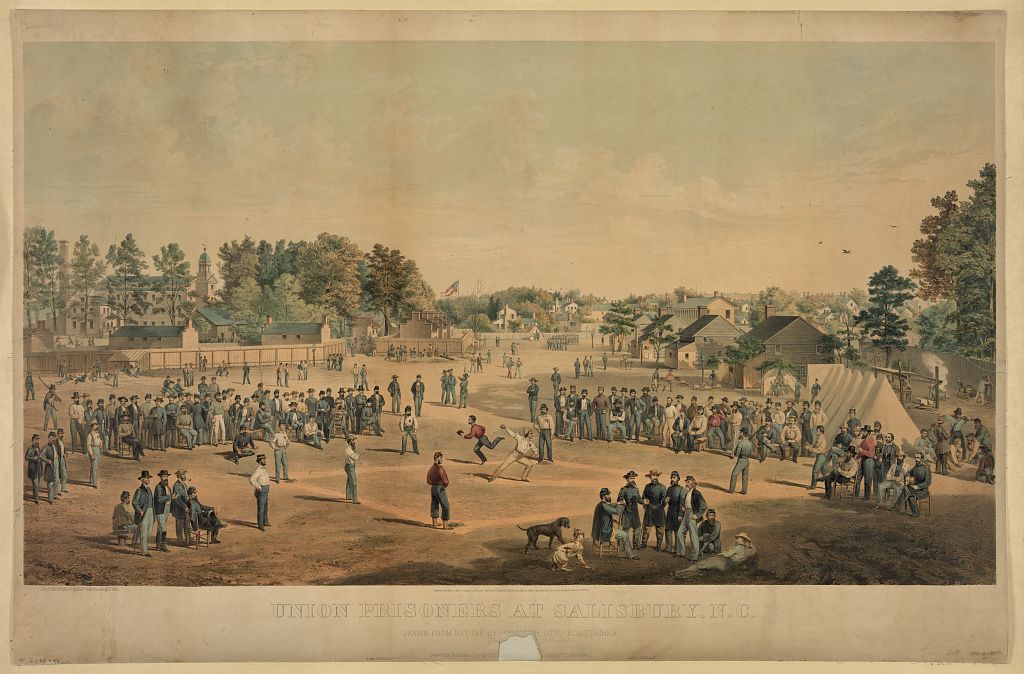 The Baseball match below is between the “Athletics”, of Philadelphia, Pa., and the “Atlantics”, of Brooklyn, N.Y., played at Philadelphia, October 30, 1865 sketched by Joseph Boggs Beale. November 18, 1865 – Illustration showing spectators around the baseball field in Philadelphia during a baseball game between the Philadelphia Athletics and the Brooklyn Atlantics; also shows two fans settling a disagreement in the center foreground.

Have you heard excessive brain labor causes baldness or the cure for wrinkles is a tepid bath in bran? Do you want to know Thomas Jefferson’s recipe for Vinegar of the Four Thieves or how to make Ox Tail Soup? Have you ever had ‘blueberry pickles’, ‘batallia pie’ or ‘snow birds’? You will learn all this and more in “Vinegar of the Four Thieves.”Our ancestors had to be resilient when they faced obstacles in daily life, from dealing with pests, medical emergencies, caring for clothing, and cleaning shortcuts. Almost everything they used in daily life was homemade. Some ideas were great but some were very strange. This book is a collection of household tips, medical cures, clothing care, and old recipes from the 1800s and 1900s. Many of the tips, such as the household cleaners, cooking tips, and ways to control pests, still work and are helpful in today’s ‘green’ environment while others such as ‘how to cure a dog of eating eggs’ will make you laugh. Either way, this book will help you appreciate the difficult life your grandparents endured. With Bonus: First two chapters of novel Ribbon of Love