You may recall from history that President George Washington married Martha Custis, a widow with children. However, you may not know the story about the Custis family and this unusual tombstone at Arlington in Northampton County, Virginia. 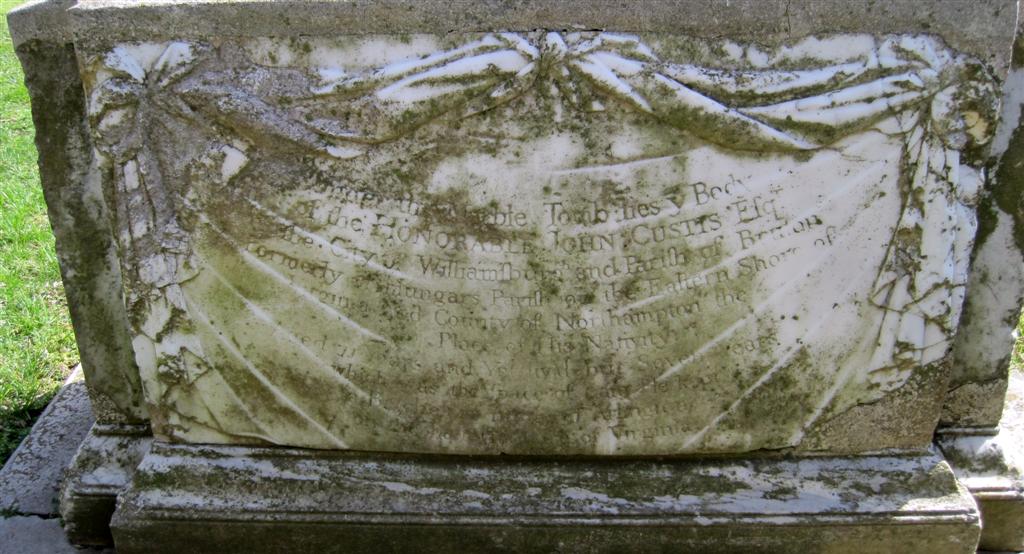 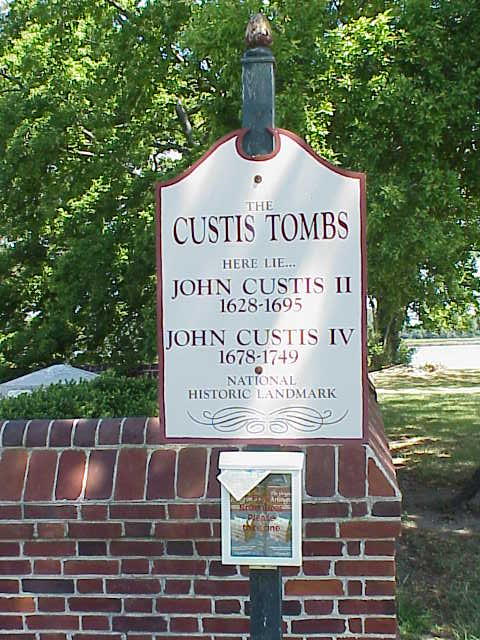 First for a little background

John Custis served on the governor’s Council from 1727 until increasingly ill health forced him to request to be suspended in August 1749. In 1744, John Custis took the extraordinary step of petitioning the Governor and Council to set a slave child free. The petition stated the boy was “Christened John but commonly called Jack, born of the body of his Negro wench, Alice.”

Unusual Statement in Will

He died soon after completing his will on 14 November 1749. At his request, he was buried on the Eastern Shore of Virginia at the Arlington plantation’s Custis Tombs. Here are his actual words:

My executor to lay out and expend as soon as possible after my decease, out of my estate, the sum of one hundred pounds sterling to buy a handsome tombstone of the best durable white marble, large and built up of the more durable sonte that can be purchased, for pillars, very decent and handsome to lay over my dead body, engraved on the tombstone my coat of arms, which are 3 parrots, and my will is that the following inscription may be also handsomely engraved on the said stone vizt “Under this Marlbe Stone lyes the Body of the Honourable John Custis Esquire of the City of Williamsburgh and parish of Bruton formerly of Hungars Parish on the Eastern Shoar of Virginia and County of Northampton the place of his Nativity aged —- years and yet lived but seven years which was the space of time he kept a batchelors house at Arlington on the Eastern Shoar of Virginia this inscription put on this stone by his own positive orders.”

And I do desire and my will is and I strictly require it that as soon as possible my real dead body, and not a sham coffin, be carried to my plantation on the Eastern Shore of Virginia, called Arlington, and there my real dead body be buried by my Grandfather the Hon John Custis Esquire where a large walnut formerly grew and is now enclosed with a brick wall, which brick wall it is my will and I strictly charge and require it that the said brick wall will always be kept up in good repair very handsomely by my heir that shall enjoy my estate; and if my heir should “ingratefully” or obstinately refuse or neglect to comply with what relates to my burial in every particular then I bar and cut him off from any part of my estate, whether real or personal, and only give him one shilling sterling, to the next heir male of my family named Custis that will religiously and punctually see this my will performed but more especially more what any ways relates to my burial in general, and if by any accident the Tombstone and appurtenances should be lost, broke, or in any ways miscarry in coming in from England, or any other ways whatsoever, in that case my positive will is and I earnestly require it that my heirs or executors immediately send to England for such another stone exactly, with the appurtenances, of the same price, until one shall come safe to hand according to my will and desire.

He and his wife didn’t get along

He had a purpose for doing this. He wanted to know that he was only happy in the seven years when he was not married. John Custis and his wife Frances never got alone during their marriage. It was said that for weeks at a time, they would not speak to each other and related messages through their servants. They quarreled over everything.

After one of these long spells of non-intercourse, Mr. Custis dressed himself with great care one day, ordered his best horse and gig to the door, and in the most polite and dignified manner, invited Mrs. Custis to accompany him on a drive. “Certainly, Mr. Custis, certainly, sir, I will be delighted, but when were you ever so courteous before?” inquired the grand lady.

Instead of taking the usual route along the bay beach, the gallant whip headed his horse straight out into the bay, the water deepening very gradually near Arlington. “Where are you going, Mr. Custis ?” asked his wife. “To h — 1, Madam,” he replied. “Drive on,” said she, “any place is preferable to Arlington.”

Presently the water began to enter the gig. “Again I ask, where are you taking me to?” said Mrs. Custis. “To h — 1, Madam, as I have already told you,” answered Mr. Custis.

“And again I say, drive on, Mr. Custis, the prospect is far brighter than that of a return home,” retorted the bold lady.

After proceeding so far out from shore that the horse was all but forced to swim, Mr. Custis turned his animal’s head to the shore, saying to his wife with much emphasis, “If I were to drive to h — 1 and the devil himself came out to meet us, I do not believe, Madam, that you would be frightened.”

“Quite true, sir,” she replied, “I know you so well that I would not be afraid to go where you would go.”

After this adventure, the couple seem to have lived more happily together, for a deed, to which they were both parties, was soon drawn up, in which mutual concessions were made in the hope that domestic tranquillity might ensue. 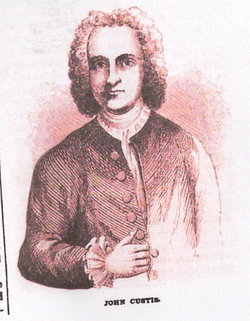 The grave of John Custis (1630-1696), Major General and member of the Council for Virginia and progenitor of the Custis family in America. The other tomb is the box-like marble tomb of John Custis IV(1678-1749) with its pyramidal top and drapery carvings on the long sides.The tombs were associated with Arlington mansion and located west of the separately listed Arlington Archeological Site.

is based in Northampton County and includes additional factual information about the residents, including John Custis.

Read more about John Custis in the historical fiction novel