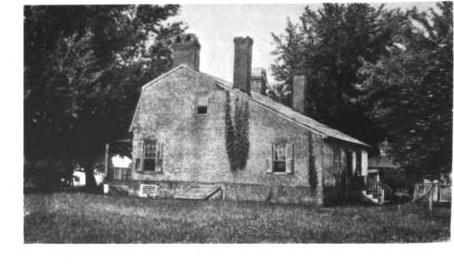 Commanding a splendid view of the upper Chester River and the surrounding country, this rare example of Dutch architecture was the home of Dr. F. N. Sheppard and his wife. Mrs. Sheppard is a descendant of Alethia. daughter of the William Comegys who built the house and who was the second son of Cornelius Comegys, the emigrant.

By the time of the American Revolution in 1776 the Comegys were a family firmly established in Kent County, Maryland. At least seven Comegys men enrolled in military units during the Revolution, and as the young republic grew and prospered in the nineteenth century members of the family participated in the general expansion.

“The old Comegys House is an 18th century brick, gambrel roof house with an unusual rear addition covered with a catslide roof which is an extension of the upper slope of the gambrel.”

The woodwork and the wainscoting are very pretty and the great fireplaces suggest the many famous dinners served there to guests in the long ago. (The wainscoting has now disappeared) It was a charming old home and the lawn, originally terraced and hedged with boxwood, extended to the waters of the Chester River.

At the time the house was built there was a ferry, (“Collister’s Ferry”), across the Chester River at this point and just across the river in Queen Anne’s County William Crump took up a large tract of land he called “Crumpton.” It was for this property that the present village of Crumpton was named.

For years there had been a well-established route for travel from “Williamstadt,” (now Oxford), Talbot County, to Philadelphia and the Northern settlements. That route led past the old Wye Church in Talbot, through Queen Anne’s to Crumpton, over the Chester to Kent, across that county to Georgetown on the Sassafras, over the Sassafras and by way of Bohemia to “Head of Elk,” and so to Philadelphia.

Cornelius Comegys, the emigrant, petitioned the Maryland Provincial Assembly in 1671 to be made a naturalized citizen. In his petition he states that he was born in “Lexmont, belonging to the states of Holland.” Millimety, his wife, was born in Barnevelt “under the domain of the said states,” and Cornelius, their oldest son, was born in Jamestown, Virginia in 1659.

Their other children, Elizabeth, William and Hannah, were born in Maryland. Cornelius Comegys emigrated to Virginia about 1600 and came to Maryland about 1663, receiving his first grant, 400 acres, called “Comegys Delight,” in that year.

Several thousand acres were later acquired by Comegy. Some of the tracts bore the following names: “The Grove,” “Vienna,” “Adventure,” “Fernando,” “Sewall” or “Utreck,” “Poplar Plains,” “Andover” and “Comegys’ Choice.” He was made a member of the Commissioners of Justice for Kent County in 1676 and was evidently a man of large interests.

Close family ties connected the descendants of Cornelius Comegys with the Wallis family, also with the Everett and Thomas families. To Nathaniel Everett was granted “Fair Harbor,” “Adventure” and “New Forest.” To Samuel Wallis, “Partnership,” “Conclusion” and “Boothbie’s Fortune” were granted. In 1659 William Thomas was granted “Kedgerton,” 1,000 acres, and “Mt. Hermon,” 89o acres.

Jesse Comegys, an officer in the Revolutionary War, son of William and Ann Cosden Comegys, married Mary Everett. They had three children, Cornelius, who was a lieutenant in the U. S. Army; Maria, who married Augustine Boyer; and Sarah Everett Comegys, who married John Wallis.