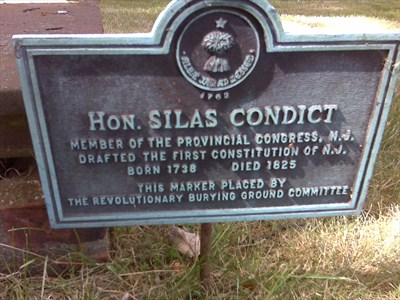 On the north side of the Sussex Turnpike Road, leading to Morristown, New Jersey there stood  a two-story hip-roofed house very similar to the Campfield dwelling.

During the Revolution and up to the dawn of the nineteenth century it was the home of Counsellor Condict, a noted Morristown patriot. The Condict family is one of the oldest in Morristown, having settled there when it was known as New Hanover.

Silas Condict, the Counsellor, as he is always called, was born in 1737, in a house on what is now Mills Street. At the age of twenty-two he began the study of surveying, and shortly afterwards married his first wife, Phoebe Day.

Upon her decease he espoused Abigail Bryam. She was a true colonial dame, and by her services to the cause won the regard of Governor Livingston and the love of many a brave soldier while the army was encamped at Morristown.

The gallant Colonel Ebenezer Condict, who succumbed to the dread scourge of smallpox in the winter of 1777,* was a brother of the Counsellor. Early in life he married Abigail Alden, a descendant of John Alden, of ” Mayflower” fame, and they often visited at the Condict House.

Mrs. Silas Condict was present when Martha Washington delivered her famous rebuke to the Morristown ladies in the Ford Mansion; but she did not feel ashamed of herself, as some of the others declared they were. She was a tireless knitter, and early in 1779 she organized the knitting-bees which were held at the Condict House for the benefit of the stockingless soldiers. It is a tradition that the knitting-needles flew so fast on these occasions that Governor Livingston praised their owners for their industry and noble work. 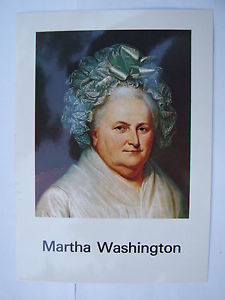 Silas Condict became a member of the legislature of the province of New Jersey in 1776. Later he was elected a member of the Provincial Congress and also president of the Committee of Safety. Many of the meetings of the latter organization were held at his homestead, and several were attended by General Washington. He was a notable surveyor and mapped out thousands of acres of New Jersey land. 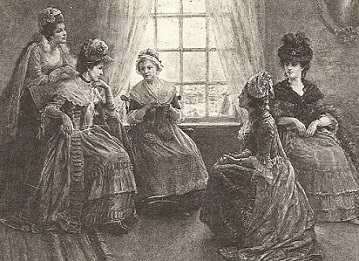 The Counsellor was a violent Whig and warmly championed his country’s welfare. There is a story told of his capturing some Tories, at the beginning of the war, for minor offences. In the old jail at the north corner of the village green they were incarcerated for many weeks. When at last set free, they planned to revenge themselves on their captor. Not far from the Condict House was a large meadow swamp, and there they lay in wait for a considerable time, hoping to take him dead or alive.

Becoming weary of watching for him, one of their number went to his house to make inquiries as to his whereabouts. The Counsellor was really at home, but his wife, suspicious of the man’s appearance, told him that her husband was in Trenton. The news was carried to his comrades in the swamp, and the disheartened band left the region with their threats of vengeance unfulfilled.

Silas Condict, like his rebel governor, vowed he would never be taken alive by the enemy, and his home was fortified to withstand sudden attacks. After the battle of Princeton several British officers, with their serving-men, in charge of Americans, were quartered on the Condict household until their exchange could be effected. According to one account, the British occupied one side of the house and the Americans the other, and a most uncomfortable time the family had with the altercations constantly arising.

One young officer of impetuous temper owned a vicious dog, which created great consternation among the household and slaves. The Britisher, when approached on the subject, haughtily refused to part with it. Finally, Condict took the matter in hand and ordered it to be put out; and out it went, although the youth drew his sword and the eye-witnesses expected the Counsellor to be instantly run through.

Many famous American generals shared the Condict hospitality during the war; and there was a saying among the officers encamped at Morristown ” that victuals were always waiting at Dame Condict’s.”

In 1799 Silas Condict left his house on the Sussex Road, and moved with his family to a larger one he had erected on the present Cutter Street. There he died soon afterwards.

He had no sons, and therefore adopted Colonel Ebenezer’s son Silas the second, who became one of his heirs and inherited much of his property. Silas Condict the second, on coming of age, married Charlotte Ford, a daughter of Jonathan Ford, and a greatgranddaughter of Jonathan Dickinson, famous as the founder of the College of New Jersey and the author of that quaint volume, “Familiar Letters to a Gentleman, by a Minister of the Gospel at Elizabeth-Town.” Charlotte Condict was worthy of her illustrious parentage, and started the first Sunday-school in New Jersey at her small home at Littleton in 1810.

The old Condict House was called the Hyndshaw House for many years, as it was owned and occupied by Rev. James Hyndshaw, whose wife was a great-granddaughter of Silas Condict. Although of plain exterior, the mantels and wood-carvings in its rooms were quite elaborate with handwork. It was destroyed a short time ago, much to the sorrow of many of Morristown’s old citizens, for it was regarded as one of the venerable links connecting the present Morristown with the village of long ago.

* The Rev. Timothy Johns, famous for having administered the Sacrament to General Washington when in Morristown, lost sixty-eight of his flock by the sourge of smallpox in that year.