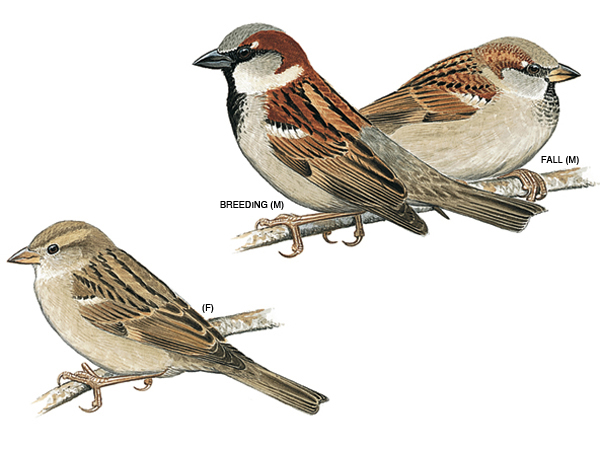 “The English Sparrow was imported to North America to protect trees from a caterpillar which is the larva of the Geometrid Moth. About six inches long. Grayish brown, the back streaked with black. Brown wings with white bars. Buff white underside. Narrow white stripe over the eyes. White and chestnut cheek patches. White sides and neck. Black throat and breast.”

The Cotton Worm and Sparrows

The English sparrows imported into New York a few years since to protect the trees of Central Park from the ravages of insects are making their benevolent way all over the country. We are glad to know that a number of these sparrows have been brought to Georgia. It would be well for the Legislature of this State to make a small appropriation next fall to import them into Alabama and to protect them against shot-guns.

At one time caterpillars were so numerous upon the trees of the parks and sidewalks of New York as to render it unpleasant for pedestrians. They would drop in myriades (sic) upon the pavements and upon the clothing of passers-by. But since the introduction of the English sparrow not a worm can be found upon the foliage. It is believed that these little birds, which multiply most rapidly, would soon protect our cotton fields from destruction. It is worth while to try the experiment.

“It wasn’t long before the destruction of crops, the spread of disease and parasites, competition with song birds, its filthy habits and a population explosion revealed its introduction in North America was a huge mistake.”

By 1887, some states saw fit to launch sparrow eradication programs.