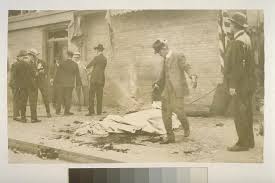 During the parade a suitcase bomb was detonated, killing ten and wounding forty in the worst such attack in San Francisco’s history. This film was made shortly after the bombing, probably to flush out the bomber.

Part I is mostly Animated with some film of Preparedness Day and Part II show more of the parade and the bombing that took place.

From the Library of Congress, the following information was provided about the film:
“Isolationism and anti-preparedness feeling remained strong in San Francisco, not only among radicals such as the International Workers of the Worlds (“the Wobblies”), but also among responsible labor leaders. At the same time, with the rise of Bolshevism and labor unrest, San Francisco’s business community was nervous. The Chamber of Commerce organized a Law and Order Committee, despite the diminishing influence and political clout of local labor organizations.

Radical labor was a small but vociferous minority which few took seriously. Violence, however, was imminent. The huge Preparedness Day parade of Saturday, July 22, 1916, was the target date. A radical pamphlet of mid-July read in part, “We are going to use a little direct action on the 22nd to show that militarism can’t be forced on us and our children without a violent protest.”

At 2:06 p.m., about half an hour into the parade, a bomb exploded on the west side of Steuart Street, just south of Market Street, near the Ferry Building. The bomb was concealed in a suitcase; ten bystanders were killed and forty wounded in the worst terrorist act in San Francisco history. San Francisco screamed with anger and outrage.

Two known radical labor leaders — Thomas Mooney (ca. 1882-1942) and his assistant, Warren K. Billings (1893-1972) — were arrested. In a hasty and bungled trial carried out in a lynch-mob atmosphere that included several false witnesses, the two were convicted. Mooney was sentenced to be executed, but a Mediation Commission set up by President Wilson found no clear evidence of his guilt. In 1918 Mooney’s sentence was changed to life imprisonment, the same as Billings’s.

Both men were pardoned

By 1939, evidence of perjury and false testimony at the trial had become overwhelming. Governor Culbert Olson pardoned both men. The identity of the bomber will probably never be known. The San Francisco Preparedness Day parade of 1916 was perhaps the largest parade ever held in the city. The 3.5 hour procession had 51,329 marchers, including 2,134 organizations and 52 bands. Ironically, the starting signals were “the crash of a bomb and the shriek of a siren.”

Military, civic, judicial, state, and municipal divisions were followed by newspaper, telephone, telegraph and streetcar unions. Many of the following divisions came from other cities of the Bay Area. This film, with its animated propagandistic prologue, was made shortly after the bombing and was clearly aimed at local audiences. Perhaps it was thought that the film might help to “flush out” the bomber. The Hearst-Pathe film of the bombing scene was filmed after most of the bodies had been removed.”