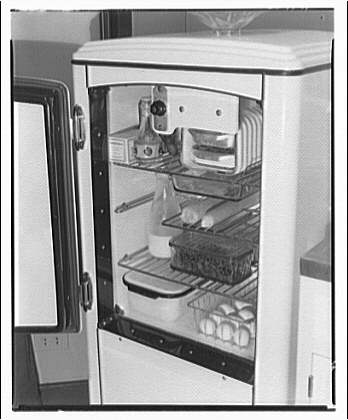 Those old small refrigerators didn’t hold much as Alabama Author, Inez McCollum depicts in this story.

A recent program of Anthony Bourdain told of his visiting an American-Okinawan while in Okinawa. The young man had returned with his mom to Okinawa at age 9. While in America, his Mother still prepared Okinawan food. The son would be embarrassed when visiting friends she would open the refrigerator and see the type food in the fridge. He no longer suffered the “open refrigerator embarrassment” now that he was in Okinawa.

My husband pastored several different churches during his years as a Baptist Minister. At one of the churches, a man who would accompany my husband when he visited prospective members had the annoying habit of opening the host’s refrigerator. This was embarrassing to my husband as well as the host. It certainly slowed the “visitation” progress.

While our sons were growing up, their appetites were humongous! As a teen, our son Joe would get a half-gallon of milk and a box of cookies and pig out. I bought groceries every two weeks as soon as the pay check hit the bank. Thus, grocery buying (replenishment) day was exciting to those sons. The event was so important to them that our oldest son, Jay, wrote about grocery buying day in a class assignment to write a story.

Once when pickings were light, John brought a friend home from little league practice. The visitor opened the fridge and exclaimed, “John, you must be poor, the fridge is almost empty!” The “open refrigerator embarrassment” affected me; but John took it in stride. Till this day, he says the only missing item was milk. That was to be delivered the next morning by the milkman. Yes, we still had that service.