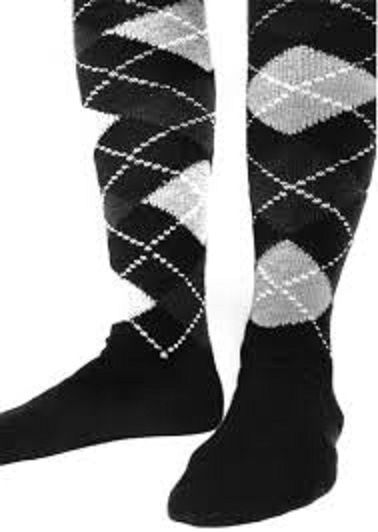 A cousin recently told me a story about my Grandfather which I had never heard. My Father’s family consisted of eight boys and one girl. With that many children in the family, I am sure there were lots of practical jokes. My Grandfather was preparing for a foot washing at his church the following day. Before going to bed, he put his clothes out for Sunday, including a pair of dark dress socks. My Dad and his older brother took those socks, turned them inside out and rubbed them with soot from the fireplace. They then turned the socks right side out and placed them back with Grandpa’s clothing. The following day at church, Grandpa removed a sock for the ordinance of footwashing. Of course, his foot was covered with soot as he sat there before God and everybody in the congregation!

Fortunate he discovered them

When our firstborn son was a toddler, my husband was packing for a trip out-of-town. After he got to his hotel and unpacked his briefcase, there was one of our son’s socks. Fortunately, he discovered the sock before going to his business meeting.

When our three sons were small, there were so many more pressing needs, it was easy to put off buying new socks. When those little socks would get holes in the heels, I would always mend them. Once when one of the boys was visiting my parents, Mother noticed how thin the heels of his socks were. She commented on this and he told her that Mother just keeps sewing them up! He came home with new socks for himself and his brothers!

A few years ago, I bought a CD of children’s songs to play when my grandchildren were in the car with me. One of the songs was entitled, “Sock Monster”. Of course as you listened to the words of the song, you would realize that the monster was the dryer. With five people in our family, I could certainly relate to that.

Recently I was at the home of a good friend of my daughter-in-law and saw a framed pair of red socks hanging on the wall. Of course, I had to find out about that. It seems a very good friend of her family only wore red socks, the reason being that his sons would not want to wear them. After his death, those red socks were given to various people and this young woman came up with the idea of framing hers.

I have noticed the past few years that there are quite a few uses for socks other than covering ones feet or hanging them on the wall. As I walked through the hobby department of my favorite bookstore recently, there was a kit for making sock puppets. This reminded me of those sock monkeys that were popular at one time.

Made from recycled socks

When I was visiting some family members in Mississippi recently, I was given a package of notepaper as a parting gift. The notepaper was made from recycled socks! I later commented that the paper didn’t smell like old socks! Then a few days ago, I was listening to a talk show, the show hostess was telling about a new collection of candles. One of the collection had the fragrance (if you could call it that) of dirty socks.

I guess I have no imagination. The only thing I have known to do with socks, other than wearing them, was to either mend them or use them for dust cloths!

Vinegar of the Four Thieves was a recipe that was known for its antibacterial, antiviral, antiseptic and antifungal properties for years. It was even used to cure the Bubonic Plague. Discover Thomas Jefferson’s recipe in  VINEGAR OF THE FOUR THIEVES: Recipes & curious tips from the past