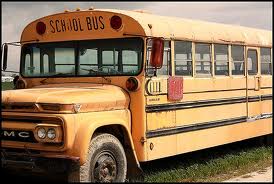 (This story from a contributing author brings back memories of riding a school bus on a icy dirt road on a mountain. Boy was it scary.  Do you have a school bus story? -Donna Causey)

One thing that has not changed a great deal through the years is the school bus.

Sure those buses have become a little more up-to-date; but they have kept the same bright yellow color.  The protective laws haven’t changed. 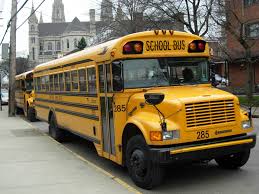 You had better look for the red stop sign to come out on the side whenever the driver stops to let children exit or to gather those children for school.  When the bus makes each stop after school, those children scatter like baby chicks escaping their mother’s wings!  Drivers, beware; it’s that time of year.

My earliest remembrance of a school bus was one that was always in Uncle Arthur and Aunt Lucy’s yard.  When we would visit them that big bus would become a play house.  My brother and I rode many miles on that parked bus, even though it didn’t move.

Most students walked in the early days

There was no school bus in our town during my elementary school years.  We walked, rode bikes, or occasionally were transported by a parent or taxi.  The junior high school I attended for two years was at an old World War II Army Base.

During those two years we rode the yellow school bus.  My first year on that bus was an eye opener!  There was a very buxom, loud girl who was on my bus route.  She would stand and sing the Georgia Tech song, which had words I had never heard used outside the Pulpit.  I had led a very sheltered life and those words were not in our vocabulary.

Fast forward a few years–my own children were car pooled to school or walked.  During a volunteer day in the church nursery,  I heard one young mother state that her favorite color was school bus yellow!

She lived far enough from school for her children to ride the school bus and it had been a long, hot summer.  I would never have made that comment; but have certainly remembered her declaration.  My sons rode the school bus to middle school (new name by that time) and to high school.  The first day of school and the last day were their favorite.

Last summer, I went with a group of Senior Adults from my church to Bismarck, North Dakota on a mission trip.  While in Bismarck, we had use of a yellow school bus in which to travel the area.  We would stop at a fast food restaurant for a meal, and all eyes would be on that bus.  Imagine the servers’ surprise when our group of seventeen senior adults stepped off.  We spent a lot of time together on the yellow school bus and we sang a lot of songs.  The Tech song certainly wasn’t one of them!