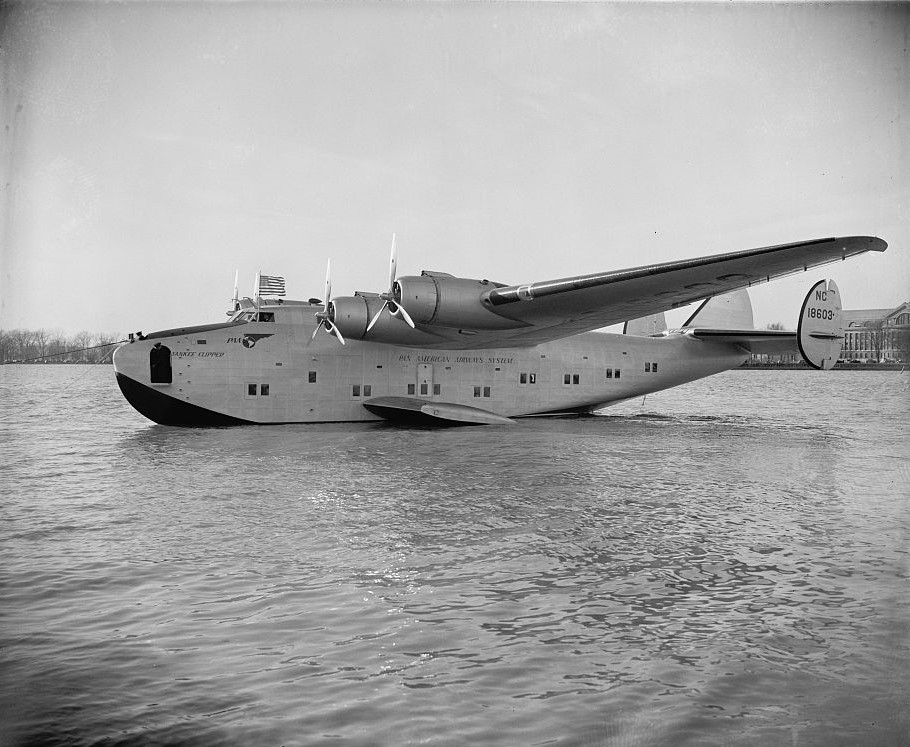 Plane travel is so common today that it is hard to imagine a time when it was new.

It wasn’t until around 1939 that inter-continental flight was even available for the average travelers. Here is a transcription of a newspaper article of what a trans-Atlantic flight was like in June of 1939. This may have been the Yankee Clipper which flew across the Atlantic on a route from New York to Southampton. The inaugural trip occurred on June 24, 1939. The Tagus River in Lisbon is mentioned in this story.  The Clipper crashed on February 22, 1943, in Lisbon, Portugal after completing its 241st trans-Atlantic flight.

Shaving Even Easy On Big Clipper

It was at Lisbon that the old dream of an overnight skyway trip to Europe ceased to be a dream and became fact. In less than 24 hours, between dinners, we spanned the breach which had alienated two worlds for centuries.

The trip from the Azores was epochal in many ways. We took off from the deep channel running between cloud-capped mountains and soon rode over ship lanes hallowed through the ages by the surface navigation of adventurers, explorers, commerce, and warfare.

The day’s diverting ride started very early for me. The sun was shining brightly all around us and as I sat down to breakfast near a window, I watched the panorama of clouds, sea, and sky.

Being an American ship, the Clipper served an American breakfast—but we had to eat it in sections. At the height we were flying coffee takes a long time to make, so we started on orange juice, and bread and jam, went to cereal, moved on to sausages and bacon. After a while, the coffee came along and we drank it eagerly. We were pretty hungry.

All The Comforts Of Home

Before coming to breakfast I changed my clothes and some of us shaved in the mens’ lounge, and here the Clipper gave us three pleasant surprises.

First, the water was really hot.

Second, one could shave without encountering the usual Pullman train lurch that can leave you with half a cheek scraped off.

Third, as you shaved, you could look out and see sun shafted clouds a mile below.

After breakfast, I sat by a window occasionally interrupting my reveries to listen to the crew’s factual reports on position and speed. I learned to know some of the ship’s signals by watching the lights over the door warning of landings and takeoffs. Whenever we hit bumpy air I habitually buckled on my safety belt, I smoked only in the main lounge.

Presently I strolled through the central corridor listening to the impressions of others on board. Veterans of air-travel agreed with my amateur’s exultation over the trip. I boasted of having seen an unusual Venus refraction over the eastern horizon before dawn. It gave a beaconlike illusion as it blinked red and white alternately. It seemed to be eternity’s stop-and-go signal.

While resting, members of the crew told incredible tales of air travel through the greater parts of the world. Some would be seeing friends in China or South America or their next trip. Nevertheless, they failed to undermine my excitement. This weekend will do me a lifetime.

After lunch, my lack of sleep the overstimulation of the trip, and the ceaseless drone of the motors forced me to slip into my berth where I lay between silk sheets. On the clipper, you lie in the berth with your feet “facing the aisle”. The motors were near but their smooth rhythm put me to sleep for three hours.

When I awakened I was lost, unable to identify the time or place until I heard the cry of “Land ho!: I dressed quickly and caught my first glimpse of the cliffs of Portugal jutting darkly under fleecy clouds, of liners and freighters trailing wispy smoke tails near the shore.

Another Stop on “Routine” Trip

As we steered up the Taus River, the mistral bucked and wobbled the slowing Clipper. But I had come too far to be frightened.

Touching the rough waters we bounced twice, then settled safely an[d] idled up the Tagus past warships, a fortress, submarines, many yachts, rowboats, and factories. White and tan buildings stood on the shelving banks and narrow streets jammed with automobiles ran beside them.

This was colorful old Lisbon, with its homing fishwives who carried supplies on their heads like packhorses. Its scores of swarthy urchins who swarmed everywhere and flirted with death in front of cars, its modern downtown hotel where we spent the night.

As we entered the customs after landing, I turned and looked back at the gigantic air chariot silent at her mooring. Her routine performance had shamed the wildest fancies.

I couldn’t come down to earth, I had just been give a place at Columbus’ feet.