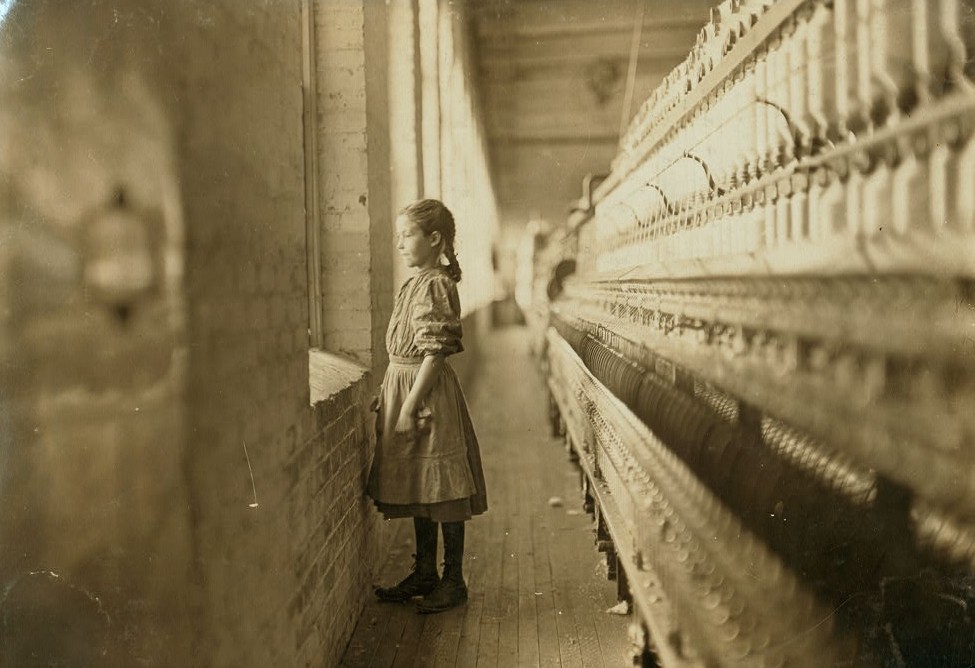 This is a haunting photograph. I wonder what this child is thinking about? Trapped in the spinning room of  a cotton manufacturing factory, she probably had many of the same wishes as any ten-year-old today.

Can you imagine this kind of daily life for your ten-year-old child?

These photographs reveal how difficult life was for our parents and grandparents in the early 1900s.

Young children worked frequently worked in cotton mills and missed out on schooling. These photographs were taken by Lewis Hines to document child labor throughout the United States. The ten year old girl looking out the window at the front of this sketch worked at Rhodes Mfg. in North Carolina. She had been working as a spinner for a year so she started when she as nine. The photograph was taken Nov. 8, 1908 by Lewis Wickes Hine, who traveled throughout the country documenting child labor. The comments under the pictures are his own. He provides the names of some of the children.

Child labor issues were debated heavily around the early 1900s and eventually led to laws and stiff penalties against those who used child labor. 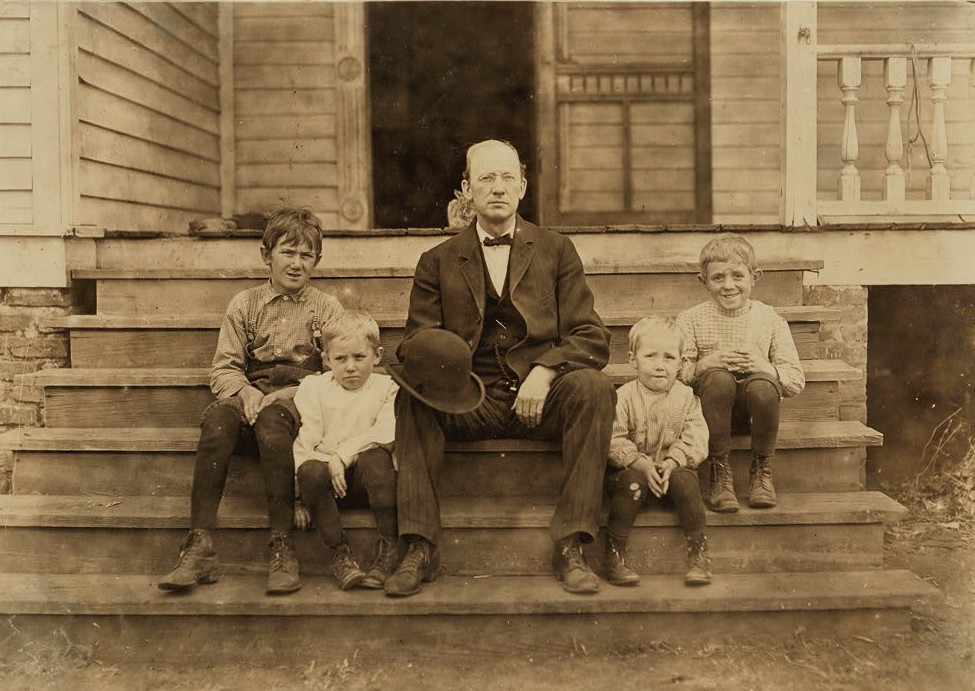 Mr. Smith, overseer in Wylie Mill, Chester, S.C. He will not let his children work in the mill. Says it is no place for them. Plenty of children below 12 in his mill. He said that it is a common practice all through the South for employers in cotton mills to evade the child labor law by allowing young children to help their older sisters or brothers. The name of the small child is not on the books. “That is the way we manage it.” Nov. 28/08. Location: Chester, South Carolina Nov. 18, 1908 – Photo by Lewis Hines documenting child labor

Only the girls worked in this family 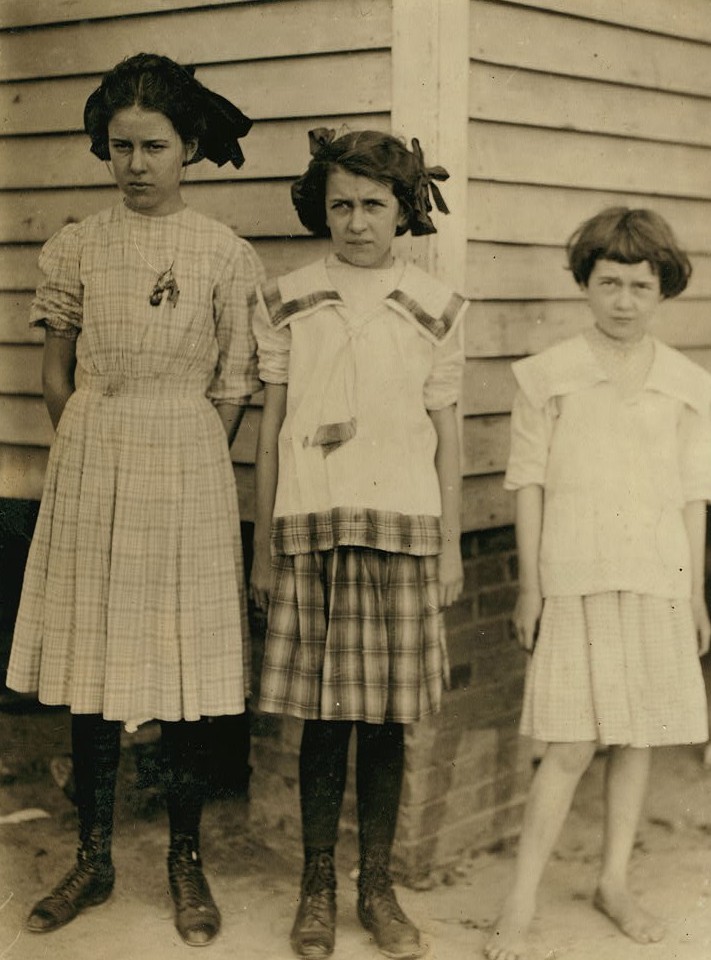 Maud Cheek one of the young spinners in the Drayton Mill, Spartenberg [sic], S.C., runs 7 sides. Worked in another mill before she came here. Maud’s two sisters Blanche and Grace all in the spinning room with her. Father did not appear to be working. Location: Spartanburg, South Carolina.May 1912.

Toting food to workers in the rain instead of attending school 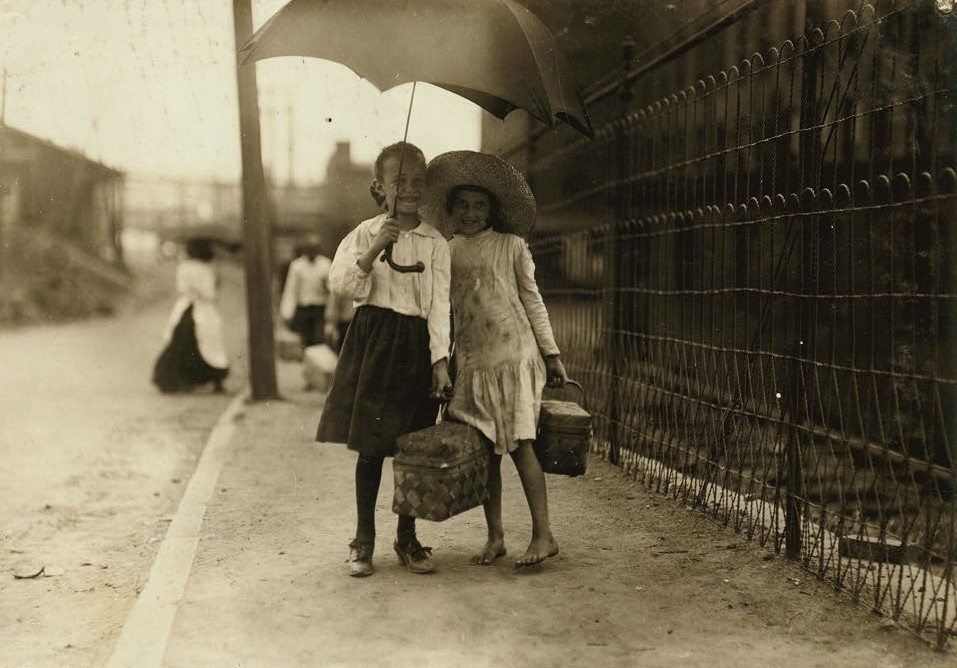 A couple of dinner-toters at Riverside Cotton Mills, Danville, Va. Myriads of these little ones carry dinners to the mill workers. The Superintendent of Schools and teachers in Danville said that many children toted dinners and did nothing else not even attending school. Location: Danville, Virginia. ca. 1910 photo by Lewis Hines.

Some young boys working at a mill in North Carolina 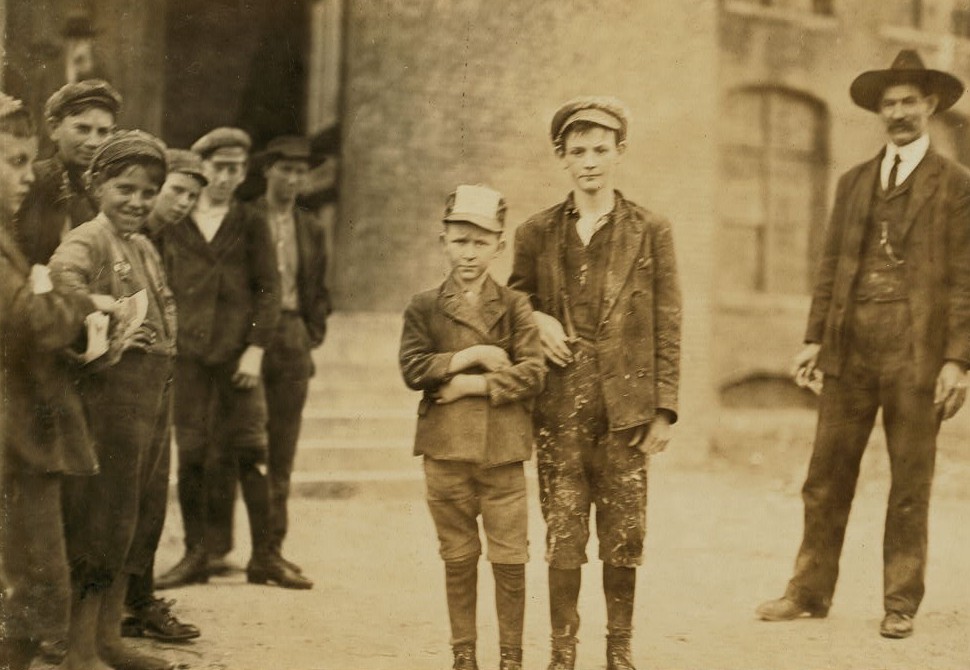 Been at it right smart two years 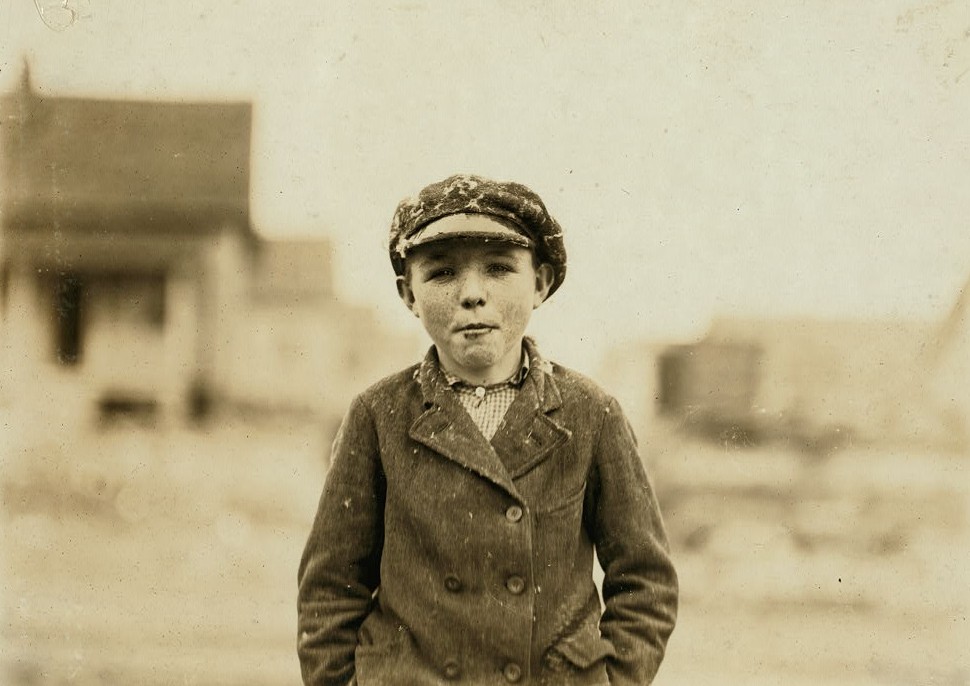 Imagine the danger involved in working these machines 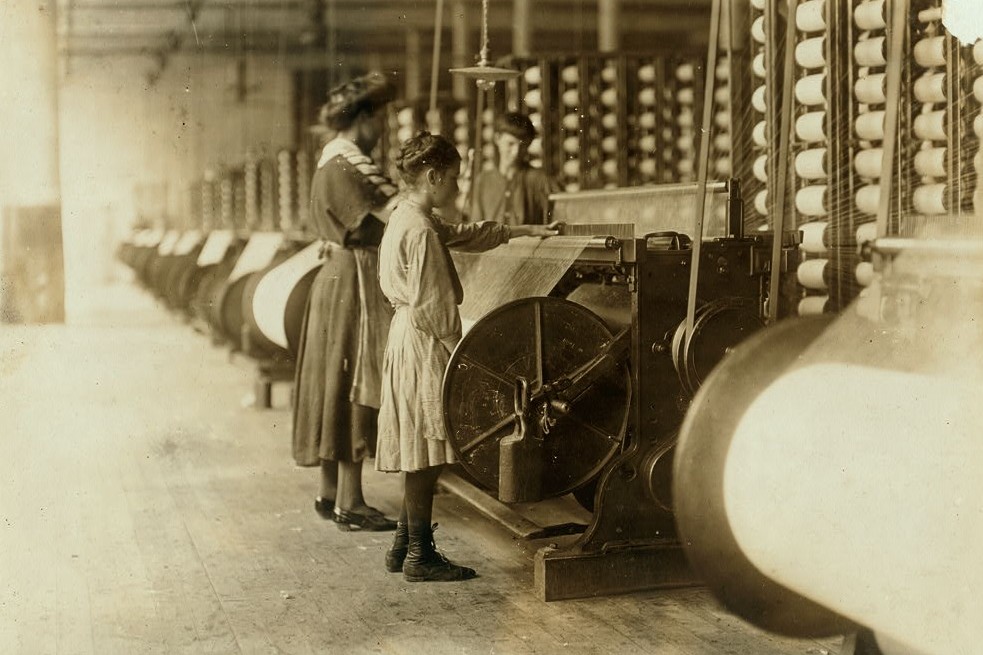 Girls running warping machines in Loray mill, Gastonia, N.C. Many boys and girls much younger. Boss carefully avoided them, and when I tried to get a photo which would include a mite of a boy working at a machine, he was quickly swept out of range. “He isn’t working here, just came in to help a little.” Location: Gastonia, North Carolina. Nov. 1908

There were laws against child labor but employers frequently ignored them 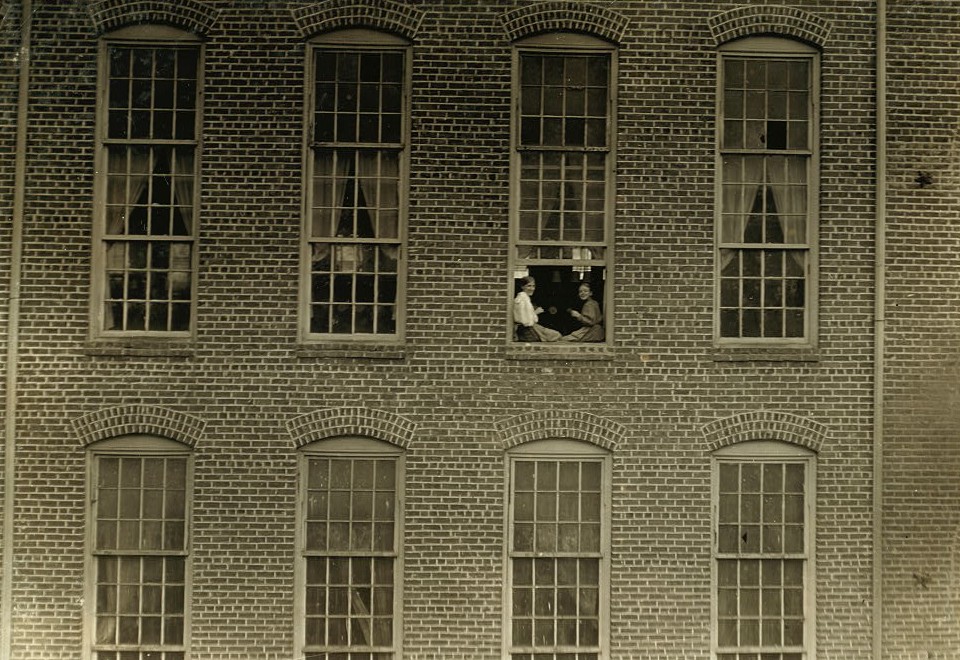 The only photo of the mill children I could get. The superintendent was too suspicious. Many young girls and boys in there on day shift. Some below 12 years old went in on night shift. Location: High Shoals Mills, North Carolina. Nov. 1908 photo by Lewis Hines 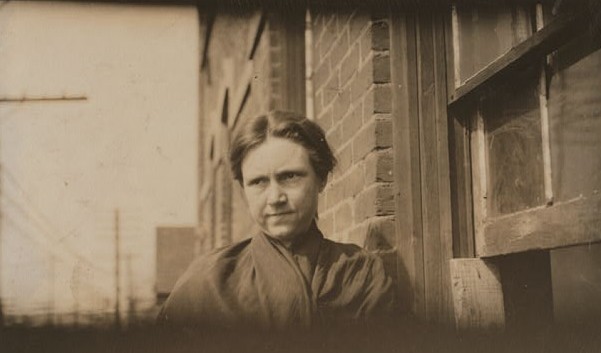 Mrs. Dora Stainers, 562 1/2 Decatur St. 39 years old. Began spinning in an Atlanta mill at 7 years, and is in this mill work for 32 years. Only 4 days of schooling in her life. Began at 20 cents a day. The most she ever made was $1.75 a day & now she is earning $1 a day when she works. She is looking for a job. Her little girl Lilie is the same age she was when she started work, but the mother says, “I ain’t goin to put her to work if I can help it. I’m goin’ to give her as much education as I can so she can do better than I did.” Mrs. Stainers is a woman of exceptional ability considering her training. In contrast to her is formed [?] another woman (this name was withheld) who has been working in Atlanta mills for 10 yrs. She began at 10 yrs. of age, married at 12, broke down, and may never be able to work again. Her mother went to work in the cotton mill very young. Location: Atlanta, Georgia. March 1915.

Lillie,  Child of Dora Strainers above, mother was determined she wouldn’t work in a mill 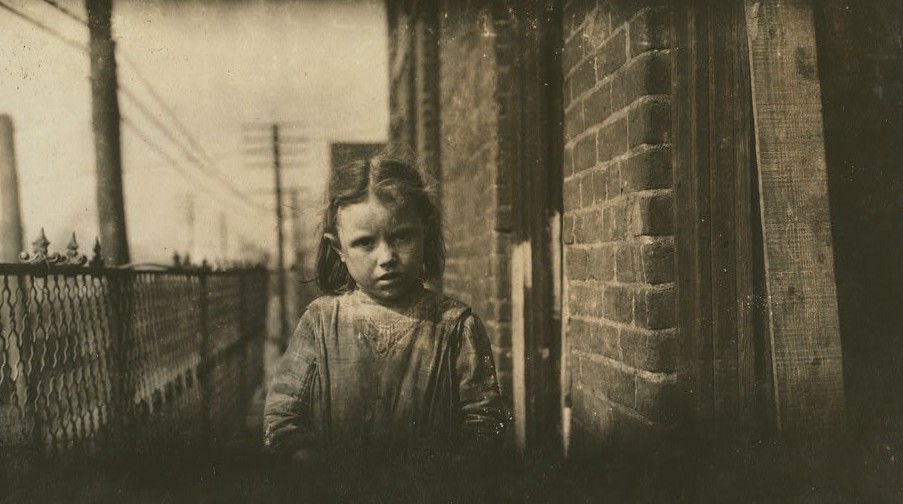 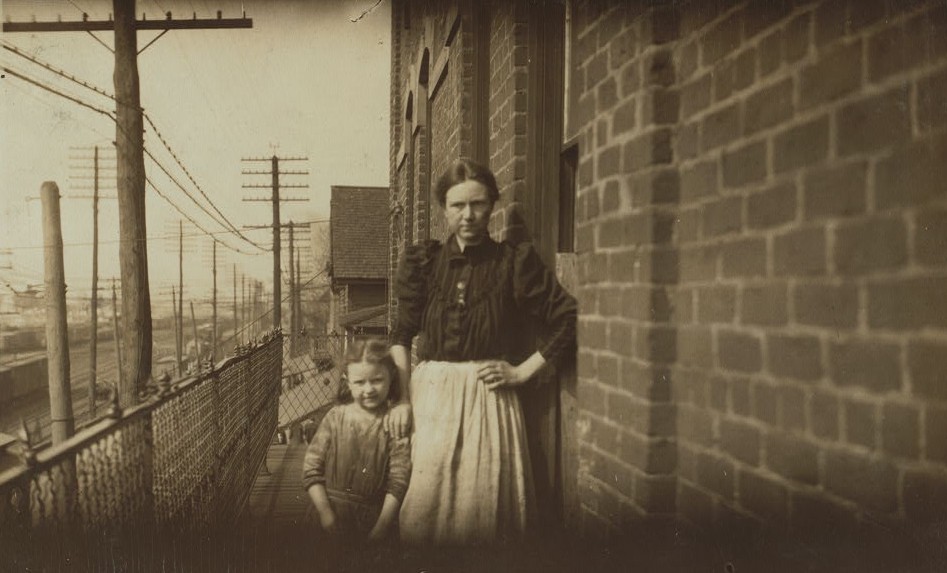 These young girls were proud of their speed as veteran spinners 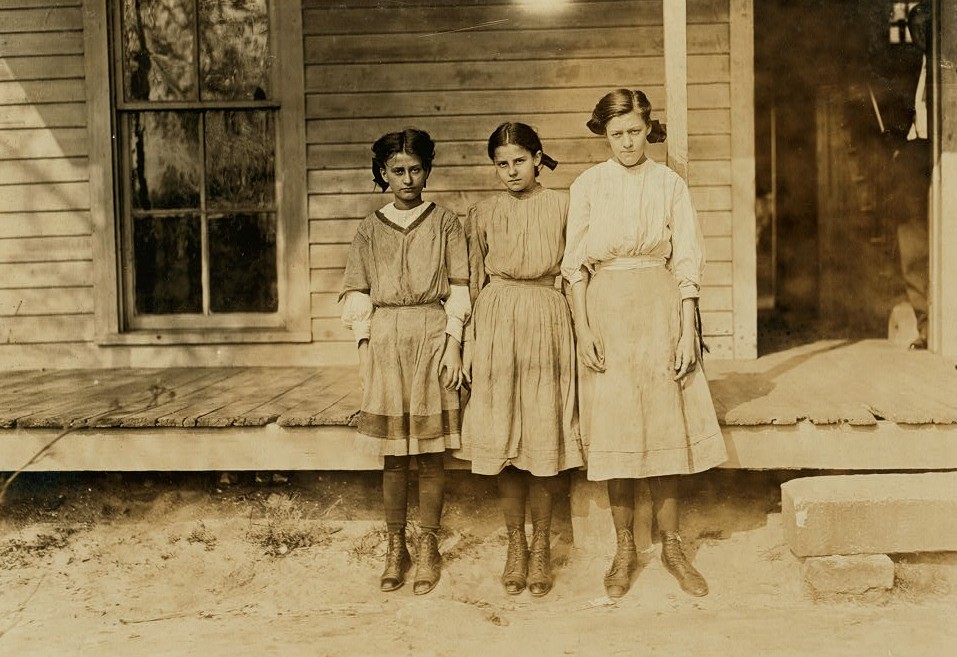 Spinners. Smallest girl – Pearlie Turner, 408 East Long Ave. Been at it 3 years and runs six and seven sides. Her Sister (largest girl) runs only four sides. I found other cases where youngest sister did much more work than oldest and family stimulated her by praising her speed and the other’s slowness. Location: Gastonia, North Carolina. – Photograph by Lewis Hines Nov. 8, 1908. 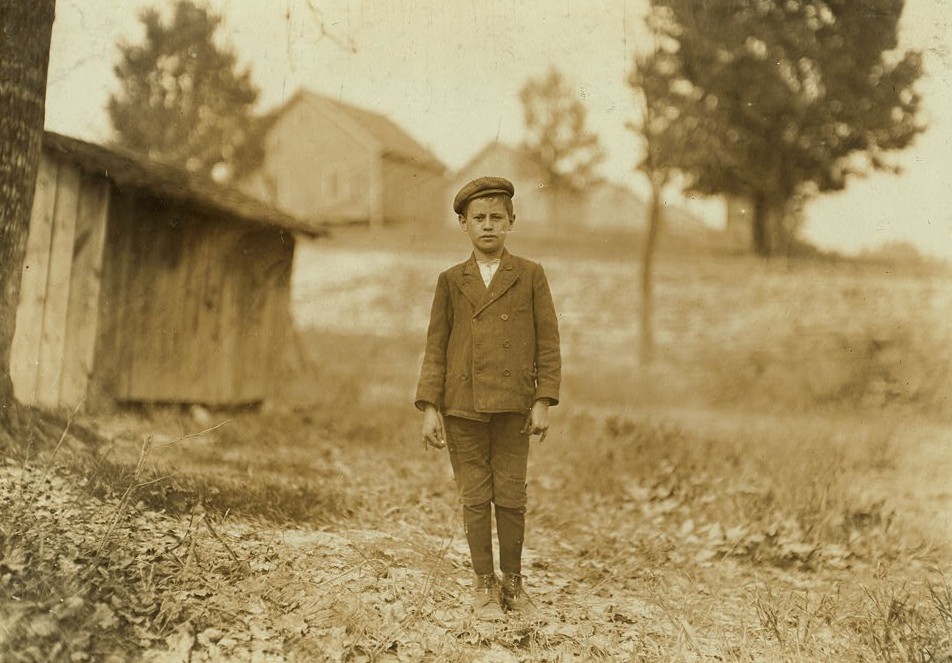 Eugene Bell, House 48 Loray Mill. Said he was 12 years old. (question). “Leastwise that’s what mother says.” (I am convinced that many children believe they are as old as they say they are,–their parents have misstated their ages so long.) Worked most two years–sweeping. Location: Gastonia, North Carolina. Nov. 1908 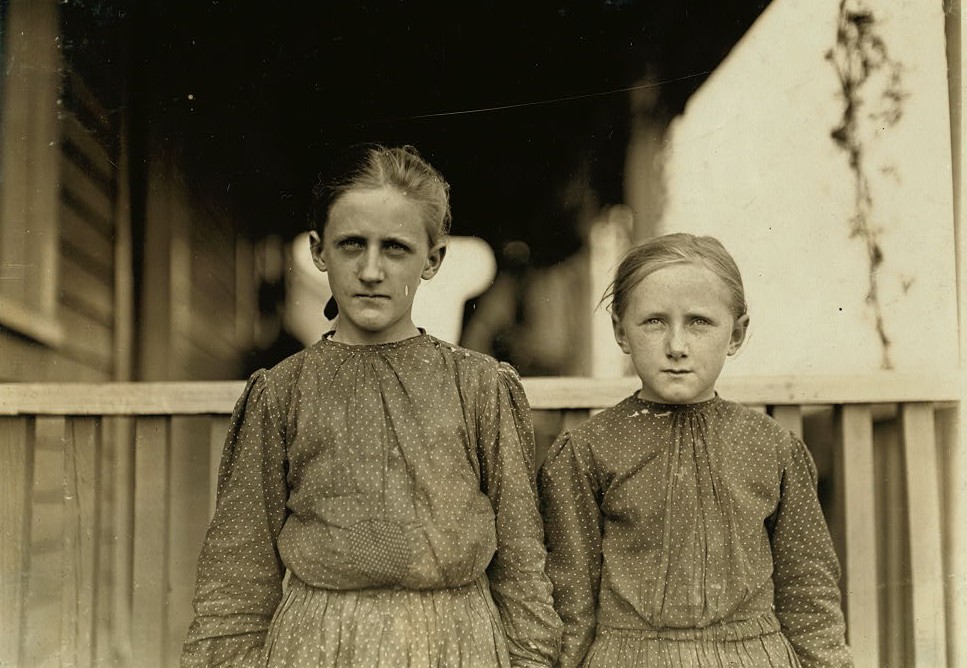 Boy on right worked at the mill starting at the age of seven! 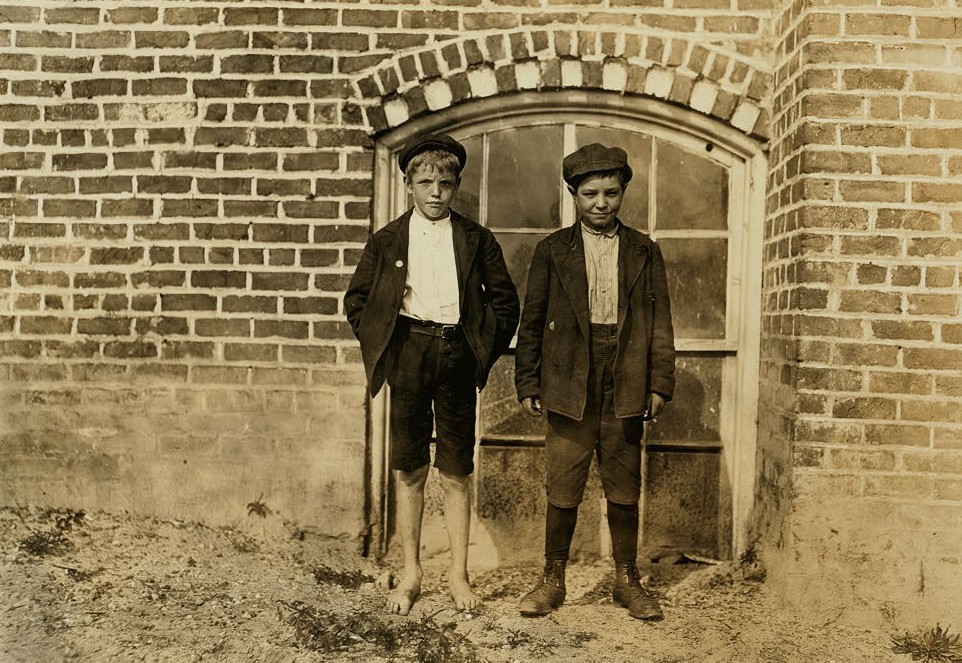 I’m certainly thankful for child labor laws that prevent this from happening today.